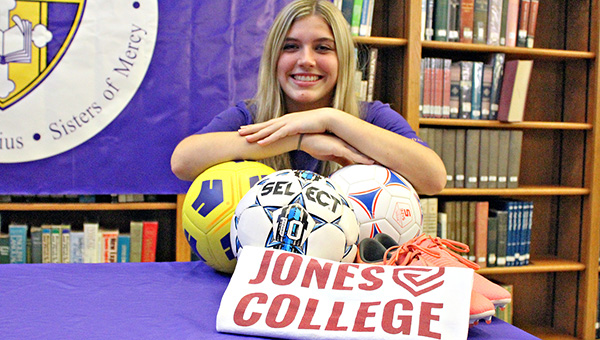 Elizabeth Theriot’s senior season was, literally, over before it started.

The St. Aloysius soccer star tore her Achilles tendon in April. It was a devastating injury that takes as long as a year to recover from and, other than a brief cameo appearance on senior night, sidelined her for all of the 2021 season.

Thankfully, she still has a lot more to look forward to.

Late last week, Theriot got a chance to continue her career by signing with Jones College.

“I called (Jones coach Dolores Deasley) after I got injured and she said, ‘You’ve still got your scholarship and we still want you here. It was really relieving. I was scared they were going to take my scholarship from me. But they were all for me coming to play,” Theriot said. “It’s like a weight has been lifted off my shoulders. I’ve always wanted to play in college. Now that I’ve finally gotten here, it feels great to make it.”

Theriot emerged as one of St. Al’s top players early in her high school career. The center back scored the game-winning goal in the 2018 MAIS Division III championship game as a freshman and totaled 24 goals in three seasons. She was selected to The Vicksburg Post’s All-County team three times.

Her injury kept her from adding to those accolades in 2021, but not from contributing. Instead of playing, she took on the role of an assistant coach. She still attended practices, helped coaches Gio Baldizon and Maurice Gilliam set up drills, and even directed some of her teammates from the sideline during games.

“We know she’s an athlete. She’s been coached by great coaches at Brilla and Cannon and all that. So what we got was already there,” Baldizon said. “But when a player gets hurt and is out for the season, you would think that player would not even show up. She was at practice every time. She was leading and helping with training. She was coaching during games. She has great leadership. I hope she continues that.”

Theriot said seeing the game from the sideline helped her understand it a little better, and believes it will make her a better player as well.

By the time Theriot was settling into her new role for 2021, Jones College had seen enough of what she could do on the field to offer her a scholarship. They didn’t back off in their recruitment following the injury, but it was apparent that the Bobcats might have been Theriot’s first choice anyway.

Jones is ranked No. 2 in NJCAA Division II and will play in the national tournament this week in Wichita, Kansas. Jones also reached the national semifinals during the NJCAA’s COVID-delayed spring season.

“We really liked the campus and we really liked the coach. They have a really good soccer program, and the coach played the same position I did when she was growing up so I thought I’d get the most from her than anyone else,” Theriot said. “It’s really cool that they’re getting so far with their program.”

Signing with Jones allowed Theriot to continue a family tradition. Older brothers Ryan and Kieran — both of whom won The Vicksburg Post’s boys soccer Player of the Year award while at St. Al — also played sports at the junior college level. Ryan played soccer at Hinds Community College, and Kieran is currently on Mississippi Delta’s baseball team.

“Kieran’s playing baseball, Ryan played soccer, so it’s nice to keep it going in the family,” Elizabeth said.
She added that she doesn’t intend for Jones to be her last stop in the soccer world.

“Playing at the next level is something that’s really exciting to me,” she said. “Playing with people that are older, and the game is going to be faster, it’s just going to help me improve and go farther than juco.”