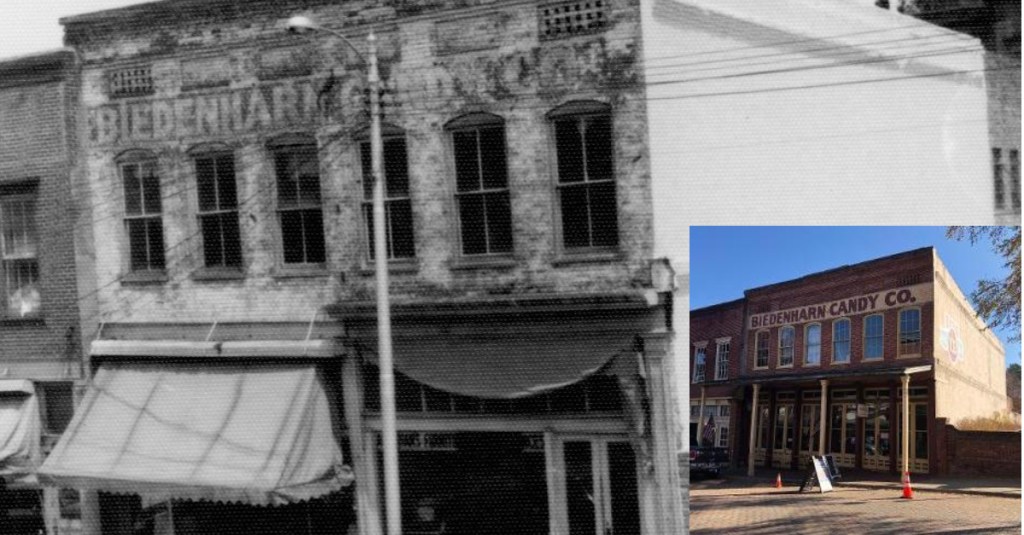 The building at 1107 Washington St. that now houses the Biedenharn Coca-Cola Museum was built by Biedenharn and Son in 1888 to house their confectionary, fruit and grocery business, which had previously been located a couple of buildings south.

Two one-story buildings were demolished to make room for the new building, which was completed in November 1888. An advertisement in the Daily Commercial Herald in November 1891 announced that Biedenharn and Son were “making 5,000 pounds of Fruit Cake for the holidays; price 25 cents per pound; call and leave your order.”

Customers were able to telephone in their orders, because the Biedenharns had had a telephone installed in October 1889 with their number listed as 96. In 1894, the company known as Biedenharn and Son was dissolved and H.H. Biedenharn operated his shoe store on the left side, while Joe Biedenharn kept the confectionary on the right.

The paper reported that the only reason for the dissolution was to keep the two lines of trade separate. It was in this same year, 1894, that Joseph bottled Coca-Cola for the first time in the world in this building. Not only did Biedenharn and Son make candy; they also operated a soda fountain and bottled their own soda water for distribution, delivering throughout the county.

After numerous requests to have Coca-Cola delivered instead of the Biedenharns’ special flavor, Joe bottled a case of Coca-Cola in his own bottles and sent it to Coke’s home office in Atlanta to ask for permission to bottle. They agreed but did not give it much merit.

Needless to say, this is what launched Coca-Cola, because you could get it anywhere, anytime and anyplace. In 1909, the Biedenharns built a large bottling plant and candy manufacturing building on the southwest corner of Grove and Walnut streets.

They continued to use the Washington Street building for retail candy sales and the shoe store. In June 1914, The Biedenharn Company announced that it have placed an order with Park Auto and Electric Company for a Universal, one and one-half ton truck, which they will use in their delivery business.

The Vicksburg Evening Post reported that “the Biedenharn Company is the first in Vicksburg to invest in a motor truck of this capacity to displace mule-drawn wagons in the hauling connected with their business.”

On Oct. 27, 1914, the Washington Street building and two others burned extensively. All four were rebuilt or rehabbed, depending on the severity of the fire damage, with new “modern” fronts and concrete floors. In 1916, the Biedenharn Shoe Store became the Sample Shoe Company owned by William Schlesinger, with the retail candy and soda sales continuing in the south side of the building operated by H.H. Biedenharn, Jr., who had renamed it Model Bakery and Confectionary.

By 1924, Model was joined by M.A. Zanfell Dry Goods Store in place of the shoe store. By 1929, Abraham Dry Goods occupied the right side, and Pik-Quick Grocery and Mary Senero Fruits were housed on the left side. Abraham Brothers Dry Goods would continue in the building until the 1970s with a variety of businesses on the right side. In 1979, the Biedenharn family purchased the building from the Abrahams and rehabbed it into the Biedenharn Coca-Cola Museum, with some assistance from the Coca-Cola Company, in order to preserve the important part that the family made to the history of Coca-Cola and Vicksburg. The family donated the building to the Vicksburg Foundation for Historic Preservation following the rehab and we continue to own and operate it today.