Gators get their wish by facing West Point 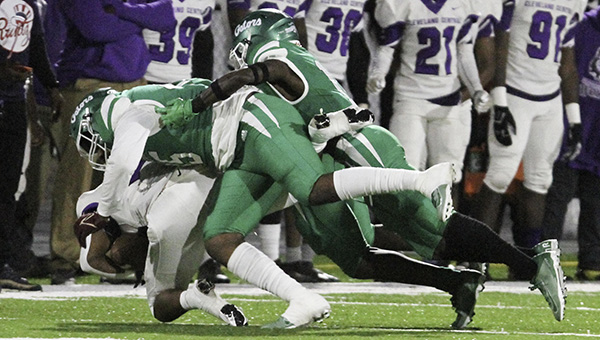 A pair of Vicksburg High defenders tackle a Cleveland Central runner during last week's playoff game at Memorial Stadium. Vicksburg will go on the road on Friday to play West Point. (Paul Ingram/For The Vicksburg Post)

Early last summer, not long after he took over as Vicksburg High’s head coach, Todd McDaniel recalled issuing a challenge to his players.

“When I first made it here, maybe a week or two into the summer program, I told the kids that we wanted to play West Point,” McDaniel said.

Sixteen months later, however, no one on either side is laughing and McDaniel is getting his wish. The Gators (7-4) have emerged as a team on the rise and will get their shot at the king when they go on the road Friday to play West Point (9-0) in the second round of the MHSAA Class 5A playoffs.

It’s the next step toward what has become a near-annual championship game appearance for West Point, and a chance for the Gators to show they have what it takes to get there.

“At the time, people were like, ‘Really!? Serious?’ Yes. West Point. Now we’re here. You’re speaking it into existence,” McDaniel said. “We’re going to go up here and play the best football program in the state of Mississippi. This is where we want to be. We want to put our kids on a showcase. We want to let the state of Mississippi know that Vicksburg is here and we’re going to be here for a while. Let’s go.”

West Point has been one of, if not the best, high school football programs in Mississippi in the 21st century. It has won seven state championships and played for two others since 2002, and won at least one playoff game in 17 of those 20 seasons.

Four of its titles came in a row, from 2016-19, before it lost to West Jones in last year’s championship game.
It’s a level few programs in Mississippi have ever reached — and it’s one McDaniel aspires to reach with Vicksburg. Going through West Point to get there is simply part of the process.

“West Point is a tradition-rich program. They’re going to play for the state championship every year or every other year. In order for us to get the program to where we want to be, in order to be the best, you’ve got to beat the best. This is our turn. I like our chances. They’re a tough, physical, aggressive football team and are well-coached, but so are we,” McDaniel said. “They’re what we’re trying to get. They’ve got something we don’t. In order to get it, you’ve got to go take it.”

The Gators’ best years appear to still be ahead. The bulk of their starting lineup consists of sophomores and juniors who already have two full seasons of experience under their belts.

West Point, meanwhile, is right back in the thick of things. It won the Region 1-5A championship for the fifth time in six years.

McDaniel, however, feels his Gators are ready to ascend to the next level and have more than a puncher’s chance. He said both teams employ a physical, grinding style on offense and defense that will boil things down to who executes it better.