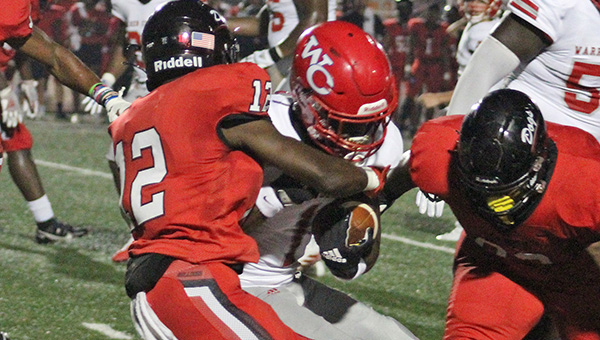 Warren Central's Trey Hall is wrapped up by Brandon's Jevon Durr (12) during their game in October. The teams will play again Friday night at Brandon, in the second round of the MHSAA Class 6A playoffs. (Ernest Bowker/The Vicksburg Post)

Over the past month, Warren Central has morphed from a team fighting for its playoff life to the kind of team no one wants to see in the playoffs.

Five straight wins, including four in a row by nine points or more, have classified the Vikings (8-3) as a team to take seriously. Now, though, they have to go up against one that might be even more dangerous.

The Vikings will go east on Friday to play Brandon (9-2) in the second round of the MHSAA Class 6A playoffs. The Bulldogs have won nine in a row after losing their first two of the season, claimed the Region 3-6A championship, and might be one of the few teams in Mississippi with as much momentum as Warren Central.

“The idea is to progress as the year goes on, and I think both teams have done that,” Warren Central coach Josh Morgan said. “I can speak on our behalf, we’re a much different team — not so much personnel-wise, but attitude and effort-wise. They’re (Brandon) growing as well. I think you’ve got two hot teams in the quarterfinals of the playoffs. It’s definitely a lot of growth that’s happened with both teams.”

This will be the second meeting of the season between the region rivals. Brandon won 38-20 on its home field on Oct. 1 to hand Warren Central the second of three consecutive losses that preceded its current winning streak.

Brandon ran 60 plays and scored 31 points in the first half of that game, showcasing an up-tempo offense few opponents have been able to keep up with. Morgan said the Vikings will be better prepared for it the second time around, but the Bulldogs have enough talent and skill to spoil any game plan.

“Offensively, the thing that sticks out and is different from everybody else is the tempo. They’re extremely fast. They’re using that to get people out of position and fatigued. We have to be ready for that, and do a lot better job with it than we did when we played them before,” Morgan said.

“It’s one thing to experience it, but also to learn from it. I think we have a little bit more answers now than questions, which is good. But stopping tempo is about making stops on third and fourth down and getting off the field,” Morgan added. “That goes back to good, old-fashioned football. Tempo doesn’t work if they’re not having positive plays and staying in front of the sticks. If we get stops and get the ball back very quickly, we have an opportunity to control the game.”

Warren Central’s offense doesn’t move as fast as Brandon’s but has improved a lot since their first meeting. The Vikings have scored 30 points or more in each of their last four games, after not reaching that mark in any of their first seven.

Running back T.J. Thompson, who had three touchdowns in the first seven games, has scored eight in the last four. He has 955 rushing yards and nine touchdowns total this season.

Receivers Trey Hall and Preston Lynch have provided reliable targets for junior quarterback Jack Wright — both receivers have 34 catches — to open up the passing game.

Combined with a steady stream of big special teams plays and clutch kicking by Brandon Gilliam, the Vikings have found their groove on offense.

“We’ve gotten so much better and gotten some rhythm. I think the passing game has helped open up some stuff, with calling Jack’s number. I can’t say enough about Preston Lynch and what he’s done to keep people off of us,” Morgan said. “T.J. has just been a phenomenal workhorse. We’ve been able to use our offensive line, but we also have answers when people stack the box. Our offensive coaching staff has done a really good job at continually manipulating our offense and putting them in the right spots, and scheming folks up.”

A big challenge this week, for both teams, will be finding the handful of new wrinkles in the game plan that the other side hasn’t seen before. It’s a familiar task for both programs.

Warren Central has reached the second round of the playoffs in five of the past seven seasons, and each time has faced a region opponent it saw in the regular season. Brandon had playoff rematches in 2018 and 2019.

“The familiarity is there. When you play somebody, you’ve seen how both teams want to attack each other. That’s not going to take a very broad jump. People are going to stick close to what they like, schematic-wise,” Morgan said. “There will be some minor adjustments, I’m sure, on their part, and there will be more adjustments on our part because they beat us. We’ll do some things differently, but we’re still who we are. We just want to be better at what we do.”