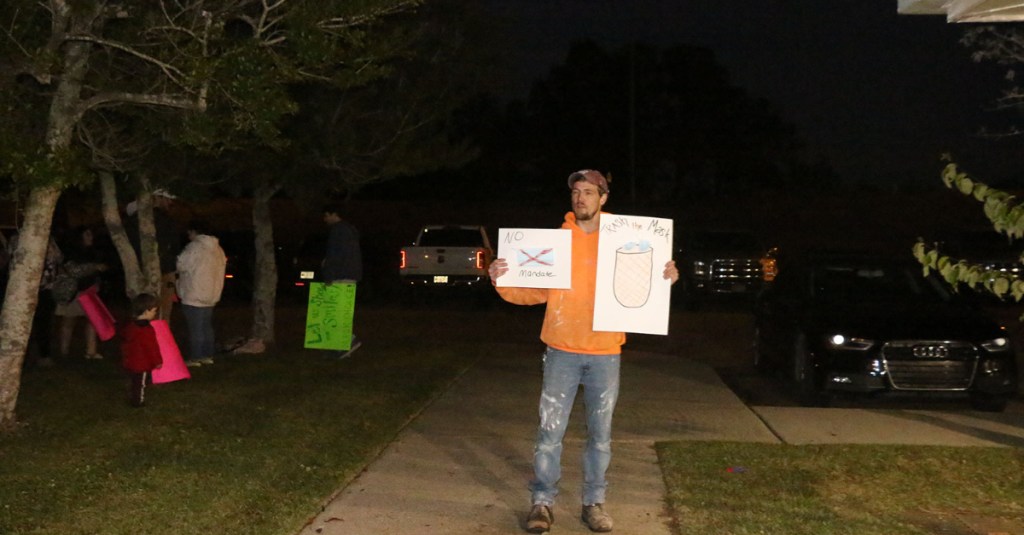 The Vicksburg Warren School District Board of Trustees was met with chanting, sign-waving protesters prior to Thursday’s meeting, during which the board set a date to end its mask mandate: Jan. 14, 2022.

While some in attendance were pleased with the board’s decision to establish a “light at the end of the tunnel,” as board member Kimble Slaton called it, others were disappointed that the mandate wasn’t immediately lifted.

While chanting “No more masks!” and “Children learn through facial expression!” some parents attending the protest said they felt the need to fight for their children. One such parent was Lesha Seale, who said she moved her family 14 hours from Florida to Vicksburg and has two children in VWSD.

“My kids don’t want to be in the middle of this, but my 10-year-old comes home every day with a headache and takes a two-hour nap. She’s failing school,” Seale said. “I’m not sure I’ll send my kids back to school at all. There’s a lot of people not sending their kids to school anymore.”

This week, VWSD reported four students out of 7,000 tested positive for COVID-19. Board Vice President Bryan Pratt acknowledged this during the meeting, stating the district has seen an 87-percent decrease in cases since school started.

George Ezell, another parent who showed up to protest, said he feels mask mandates will do more harm to children in the long run.

“My daughter, she goes to school, she wears a mask all the time, and I have noticed that she keeps a sinus problem a lot now. Prior to masks, she didn’t have that problem,” he said. “Your body has to take in germs in order for your immune system to build up. If they’re not able to get in the germs and stuff they need, their immune system is going to weaken.

“Hell, they’re going to help kill them by not letting their immune systems do the work.”

Ezell and Seale also decried Critical Race Theory curriculum, and said he felt the district was overstepping its bounds in terms of raising children versus educating them.

“This is our children. The school is there for the children to learn,” Ezell said. “When the kids are there, they tell them what to do. But when it comes to their health, leave that to the parents to deal with. If you want your child to wear a mask, fine, put a mask on your child. COVID, to a mask, is like throwing a BB at a chainlink fence.”

During Thursday’s meeting and the board’s October meeting, statements from Vicksburg Physician and Mississippi State Health Officer Dr. Dan Edney were cited. Edney said in a letter and via phone that he did not support removing the mask mandate, based on guidance from the CDC and Mississippi State Department of Health doctors.

Protester Charlotte Worthington stated she wasn’t so sure the MSDH really had children’s best interests at heart.

“I really don’t care about Dr. (Thomas) Dobbs or Edney or whoever,” she said. “Why would I trust them? How do I know they’re telling the truth? Every county is different to me and we all know that. Our county is not like Neshoba or Hinds County. We’re different.”

The parents said the next step they planned to take was to keep their children home from school in protest, or begin homeschooling them full-time as an alternative to attending VWSD schools with a mask order in place.