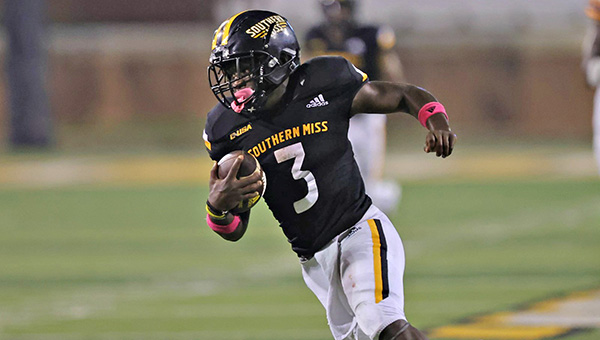 Southern Miss running back Frank Gore Jr. runs with the football earlier this season. The Golden Eagles will go on the road Friday to play Louisiana Tech. (Southern Miss Athletics)

It’s unclear whether Southern Miss’ new offense has a catchy name like the Wild Eagle, Running Bird, or Golden Cat. There will be time to figure that out, though, since it’s here to stay.

After the Golden Eagles used a plodding, ball control offense based around the wildcat formation to nearly pull off one of the biggest upsets of the college football season, coach Will Hall said he plans to keep it — and even expand who takes snaps — for the last two games of the season.

Running back Frank Gore Jr. and wide receiver Antavious Willis played quarterback against No. 15 UTSA last week. Hall said a number of players could do so Friday night at Louisiana Tech and in next week’s regular-season finale vs. Florida International.

“Frank played well and he’s in treatment and we’ve got a lot of guys we’re going to play in there this week. Shoot, we might play six or seven of them back there,” Hall said. “Looking back on it, I probably should have had more people ready to play at that spot, more than just Frank and (Willis) and we’ll transition to that. We’ll play a bunch of people back there this week, it’ll be fun, it’ll look like the cavalry running in there.”

Hall said switching from a traditional offense to the wildcat — basically a single-wing offense in which a running back takes the snap from center — was born out of a desire to inject some life and fun into a stagnant offense.

Southern Miss (1-9, 0-6) has lost eight games in a row. It has only scored more than 19 points once and ranks last among 130 FBS teams in total offense. It has had six of its turnovers returned for touchdowns.

Because of injuries and ineffectiveness, five of the six quarterbacks on the roster have thrown at least one pass this season. The sixth, Jack Walker, was injured in training camp and has not played at all.

“Well, what else are you going to do? You know there ain’t a whole lot else. Kind of a last-ditch effort,” Hall said after the game against UTSA.

Hall said he had seen enough from his players to evaluate them for next season and decided to change things up to give them a better chance to win the few games left on this year’s schedule.

“We’ve seen what we’re building, we’ve kind of got an idea, schematically, offensively, at what we can be and what we can become moving forward. And it just became a deal of with these older guys who are stuck in it, let’s give them a chance to win,” Hall said at his weekly press conference on Monday. “From a whole program, holistically, it gives us the best chance to win going down the stretch. I didn’t want to sacrifice early on in the season for what we’re trying to build, because we still had a lot of questions that we wanted to answer moving forward with a lot of kids.”

The wildcat was introduced against undefeated and 15th-ranked UTSA and worked just like Hall had hoped. While it did not lead to a lot of extra production — the Golden Eagles only had 137 net rushing yards and 189 total yards — it did keep them in the game until the very end before losing 27-17.

Southern Miss held the ball for more than 37 minutes and led 17-10 late in the third quarter. UTSA forced two fumbles and an interception from Willis in the fourth quarter and scored 17 unanswered points to pull out the win.

Gore and Willis combined to complete 4 of 7 passes for 52 yards, with no touchdowns and one interception. Gore ran for 123 yards and a touchdown on 20 carries, and Willis ran it 19 times for 46 yards.

“We’re snapping it to the running back, they’ve got to play no safeties to have enough to stop the run, and if they do they’ve got to be one on one. We’ve got to be able to throw it and make a play, so it’s very simple football,” Hall said. “It’s what you’ll see at any 1A high school game every Friday night. Hopefully we can keep going with it and it’ll give us a chance to win.”

That will not, Hall added, involve scoring 40 or 50 points per game. He said the game plan against Louisiana Tech (3-7, 2-4) and Florida International will be similar to what it was against UTSA — plod down the field, score a couple of touchdowns, and rely on the Golden Eagles’ solid defense to make it stand up.

“I’ve been a top-40 offense everywhere I’ve been, I’ve been a top-10 offense a lot, we probably had the greatest offense in Division II history in 2013. It’s not what we’re going to be,” Hall said. “There will come a day when we light this scoreboard up here and we’ll have to replace all the bulbs in it. But that’s not going to happen this year. For our team, we need to milk and pound it and try to pound out two wins going down the stretch.”