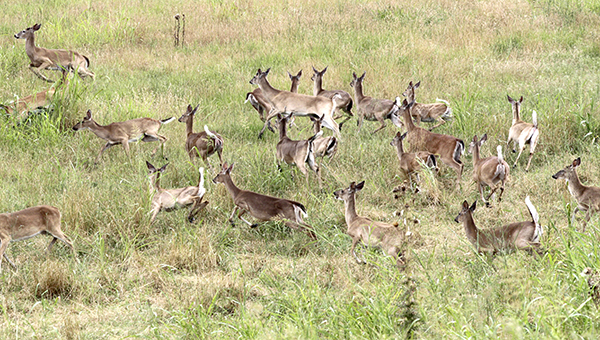 Deer are seen clustered together off of the levee near Eagle Lake. (Courtland Wells | The Vicksburg Post)

For seven long months in 2019, floodwaters in the Yazoo Backwater Area forced thousands of people from their homes.

Backwater pumps could have prevented these tragedies, but it wasn’t until the following year when the U.S. Army Corps of Engineers gave its final approval and completed requirements under the National Environmental Protection Act that a project that had been initiated 80 years ago looked like it would finally be completed.

The approval for the Yazoo Backwater Pumps had come under the administration of President Donald Trump.

But after President Joe Biden took office, the Corps was required to brief a whole new administration on the project and on Wednesday, the Environmental Protection Agency announced it was rejecting the 2020 Proposed Plan for the Yazoo Pumps Project on the grounds that the project is prohibited by EPA’s 2008 Clean Water Act Section 404(c) Final Determination.

“I couldn’t believe it when I found out,” Eagle Lake resident Paul Banchetti said, after learning the EPA had squashed plans for the pumps.

“I am extremely saddened by the decision. So many different entities have studied this, and I certainly can’t understand the EPA approving it a year ago and then rescinding that decision now. It just doesn’t make sense to me,” Banchetti said. “I think politics were involved. I think because it was approved during the Trump administration, this certainly angered some Democrats and I think this is a way of responding to that — rescinding the approval that took place during the Trump administration.”

“Everything done by Trump must be undone. It is just as political as it gets,” Eagle Lake home and landowner Hunter Fordice said, about the EPA’s rejections of the Yazoo Pumps Project. “(Congressman) Bennie Thompson and Biden undo everything Trump does.”

Thompson initially supported the project’s redeveloped plan drafted by the Corps, which recommended a new location for the Yazoo Backwater pumping station at Deer Creek that would be operated by natural gas rather than diesel, and entails thousands of acres of conservation easements for reforestation and the installation of 34 supplemental low flow groundwater wells to enhance aquatic resources.

But in November 2021, Thompson, who represents the 2nd Congressional District, serves as the chairman of the House Homeland Security Committee and is the Jan. 6 Commission Chairman, decided to request a probe into the Trump Administration’s handling of the decision before moving forward with the pump project. Thompson had cited “serious issues” and claimed top scientists were ignored in the 2020 approval of the project.

Fordice, who is an avid hunter, recalled watching ducks on pristine wetlands that are being managed properly and seeing 12-foot watermarks on the trees.

“It’s devastating to the environment to have 12 feet of water over (the land) for seven months as we did in 2019, so the EPA is not protecting the environment at all,” he said.

Ken Klaus and his wife Diane, who live in the flood-prone area, know firsthand the devastation caused by the 2019 flood. The couple’s house took on water and they were forced to leave their home for higher ground.

“I am among the many who are both saddened and angered by the EPA’s decision,” Klaus said. “The advanced and more detailed studies revealed the truth concerning the pond berries and wetlands and confirmed the benefits of the pumps. But the agency of scientists entrusted with our environment ignored the science, and chose politics even though the 2019 flood clearly demonstrated the devastation that prolonged flooding had and will continue to have on the residents, economy, wildlife and the environment of the South Delta.”

Klaus said he and his wife, however, will continue to support the project during this next phase.

While not fully abreast of all the details, District 2 Warren County Supervisor William Banks said he is disappointed the EPA rejected the proposed plan for the pumps, but will continue to support efforts in the fight for completion of the project.

“I thought surely this time it was going to go through. I don’t know how it is going to work out, but I think we are going to get together and get some more letters and see if that will help,” Banks said.

At a press conference held by the EPA at the Vicksburg District offices to discuss the project in January, Lt. Gov. Delbert Hosemann said he was hopeful for the pumps project and referred to it as “a meeting between the environment and people of Mississippi.”

But following the announcement Wednesday, Hosemann expressed his disappointment in the news about the pumps.

“To say we are disappointed in the EPA’s rejection of the Yazoo Pumps and Congressman Thompson’s stance against the project is an understatement. The federal government has an obligation to the families and farmers in the South Delta, and we will continue to fight for them,” Hosemann said.

There is also a responsibility to its natural inhabitants.

“You used to have to watch out for deer coming to Eagle Lake and now if you see one every couple of months on the side of the road at night, you have seen something, because the deer are gone,” Banchetti said.