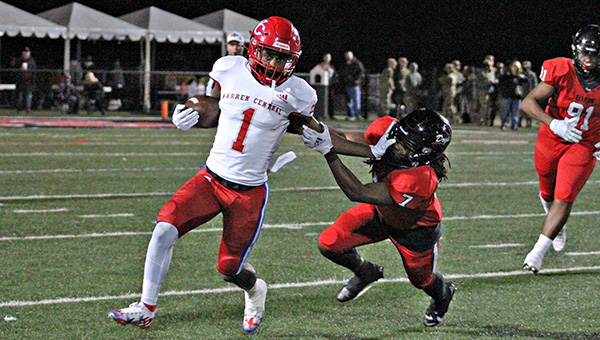 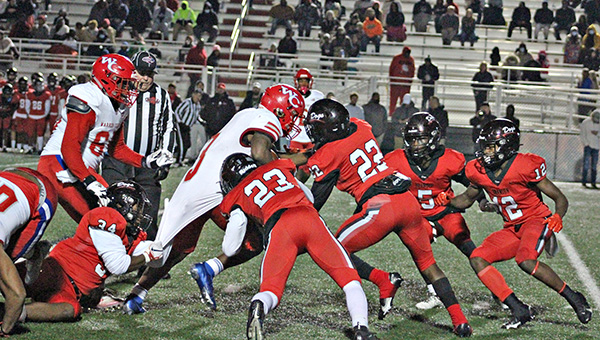 Warren Central running back T.J. Thompson has his jersey pulled as he fights for yardage against a pack of Brandon defenders. (Ernest Bowker/The Vicksburg Post) 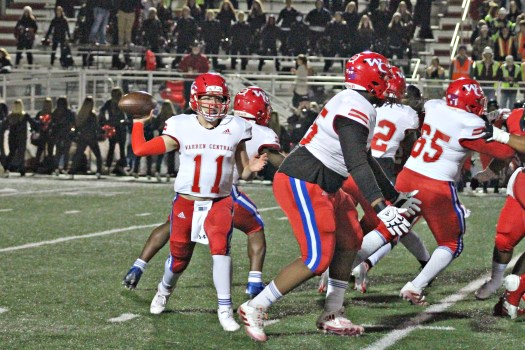 Warren Central quarterback Jack Wright (11) throws a pass in the first quarter of Friday's playoff game against Brandon. Wright was 10-of-17 passing for 75 yards in the Vikings' 42-17 loss. (Ernest Bowker/The Vicksburg Post) 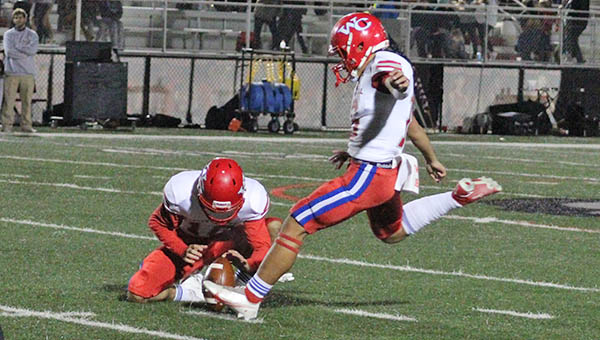 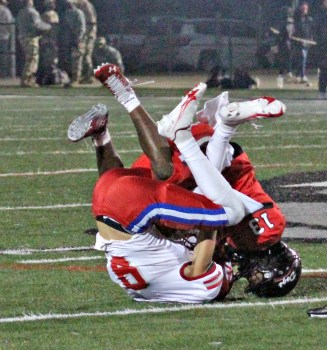 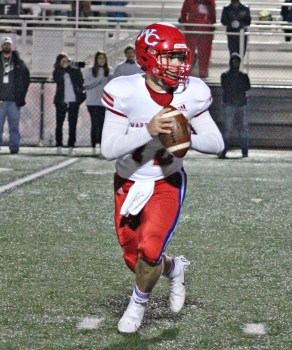 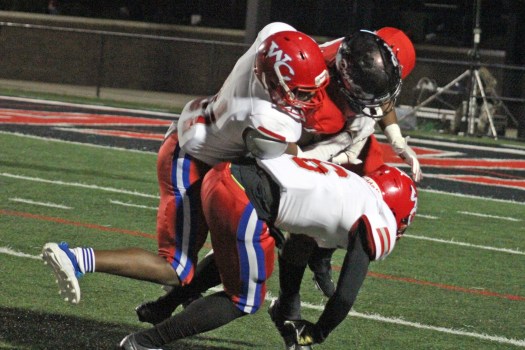 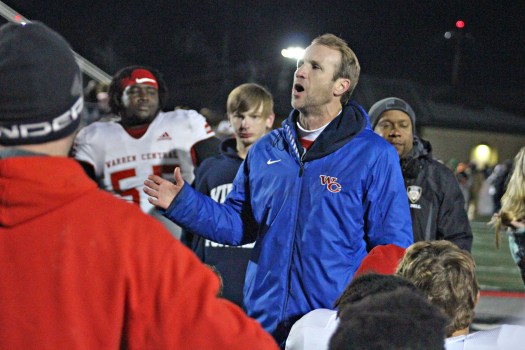 BRANDON — Warren Central went on a magical ride over the past five weeks, but found out the one bad thing about it all — the sudden, unpleasant stop that often waits at the end.

Landon Varnes threw three touchdown passes and ran for another score, Christopher Brooks returned an interception for a touchdown, and Brandon ended Warren Central’s winning streak and season by beating the Vikings 42-17 in the second round of the MHSAA Class 6A playoffs on Friday night.

Warren Central won five in a row after an 0-3 start in region play, taking it from a playoff longshot all the way to the second round. It simply ran out of gas against a strong Brandon (10-2) team that won its 10th consecutive game.

“It’s not the way we wanted to end it. I thought we had a really good week of practice and we really weren’t expecting this type of outcome,” Warren Central coach Josh Morgan said. “But that’s the way this game is, and this is a brutal time of year. One team’s dream gets killed and the other one keeps going. But the ride is what these guys need to be remembered for. It just kind of ran out on us. This wasn’t our night.”

Brandon has come on strong as the favorite in the South half of the Class 6A bracket, and showed why against Warren Central (8-4). The Bulldogs scored four touchdowns in a four-minute span of the first quarter and never looked back.

Varnes hit Devin Thigpen for a 7-yard touchdown and Lester Miller for a 19-yard score, sandwiched around a three-and-out by Warren Central. On the Vikings’ next drive, Jack Wright was intercepted by Blake Smith at midfield and Smith returned it to the 2-yard line.

Jarvis Durr ran it into the end zone on the next play to put Brandon ahead 21-0 with 3:06 remaining.

“One big play after another, it seemed like. Especially early on. We knew momentum was going to be a really big deal in this game. We were after it first and it didn’t work out that way for us, and they got it,” Morgan said. “They started hot and we started slow, and unfortunately it wasn’t much of a ballgame the second half.”

Warren Central settled in and won the second quarter, but didn’t cut into the deficit very much. Brandon Gilliam kicked a 41-yard field goal and Ashton Murphy returned a blocked punt 13 yards for a touchdown to cut it to 21-10 with 1:52 left.

On Brandon’s final drive of the half, however, Varnes went deep to Miller for a 55-yard touchdown that broke the Vikings’ momentum.

“That was my second read. I went one, two, and came off of him and I saw (Miller) deep. Nobody was over the top of him so I just let it ride,” said Varnes, who completed 12 of 16 passes for 183 yards and three touchdowns, with no interceptions.

Brandon added a touchdown midway through the third quarter on Brooks’ 40-yard interception return to put the final nail in the coffin.

T.J. Thompson scored a late touchdown for Warren Central and finished with exactly 100 yards rushing. The Vikings had 197 yards of total offense.

“We’re trying our hardest the whole time to think we’re always in it and nothing can put us down. But it’s tough whenever you have three turnovers, not many yards, can’t move the ball much,” said Wright, who was 10-of-17 passing for 75 yards, no touchdowns and two interceptions. He left the game late in the third quarter with a rib injury. “We just didn’t play very well offensively. Even if we did stop them on defense we couldn’t do anything on offense.”

The Vikings had two drives stall out inside the 20-yard line in the second half — including one that started at the 10-yard line following a dropped punt snap by Brandon — to stack up alongside a host of other what-ifs and could’ve-beens throughout the game.

Jaylon Trisby was tripped up near midfield by the last defender on a kickoff return in the first half, when it was still only 14-0, and Smith’s interception came three plays latter.

Two potential interceptions were dropped by Warren Central’s defense, including one on Brandon’s final drive of the half, just before the long touchdown from Varnes to Miller. Wright’s two interceptions both led to scores, and an onside kick was loose for a moment before Brandon recovered. The end result was a blowout on the scoreboard that could have easily been much more competitive.

“The margin for error right now is so thin. (Brandon) played very well and they had a lot to do with a lot of it. I thought their defense played really well and their quarterback was really good,” Morgan said. “This game is about making plays and we didn’t make enough of them.”