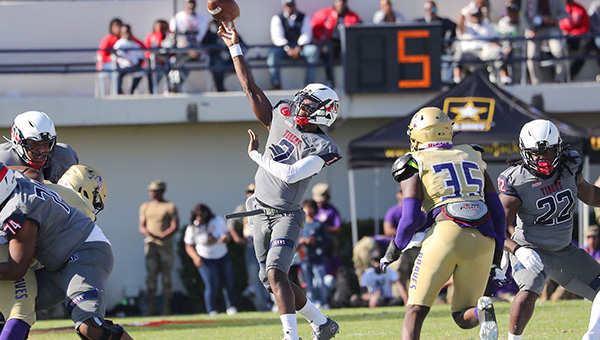 JACKSON (AP) — Jackson State cemented its rise as a power in the Southwestern Athletic Conference by ending the dynasty of its biggest rival.

The Tigers (10-1, 8-0) won the SWAC East Division and will play for the conference title on Dec. 4 for the first time since 2013. They’ll face Prairie View A&M, which clinched the West Division title with Alcorn’s loss.

Alcorn (6-5, 5-3) needed to beat Jackson State and have Prairie View lose next week’s regular-season finale against Mississippi Valley State to clinch its seventh consecutive division championship. The Braves did not play during the spring 2021 season. They won four SWAC titles during their reign.

Sanders, the son of head coach Deion Sanders, was 28-of-39 passing for 297 yards. Keith Corbin III made nine catches for 110 yards and two touchdowns.

Felix Harper threw for 210 yards and a score for Alcorn State, and Stadford Anderson ran for 86 yards on 15 carries. Harper’s 50-yard touchdown pass to Calvontay Key midway through the third quarter tied the game at 10.

Sanders’ 31-yard touchdown pass to Shane Hooks snapped the 10-all tie in the final minute of the third quarter. Sanders’ 2-yard TD to Corbin gave the Tigers insurance with 3:23 remaining in the game.

The Jackson State defense, which came in with an NCAA Division I-leading 44 sacks, added five more, two by James Houston. They also intercepted Harper once.