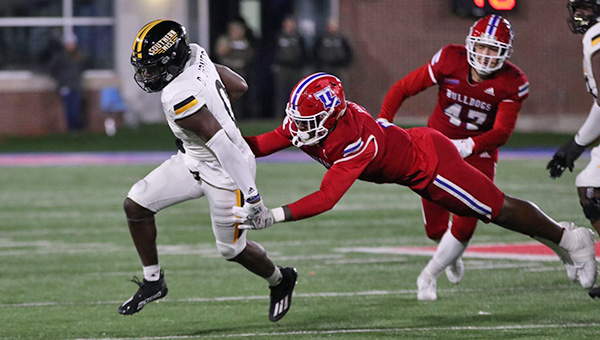 Southern Miss' Demarcus Jones (0) tries to shake off a tackler during Friday's game against Louisiana Tech. The former Warren Central star ran for a season-high 87 yards as the Golden Eagles won 35-19 to snap an eight-game losing streak. (Southern Miss Athletics)

RUSTON, La. — Southern Miss finally found the answer to its season-long quarterback issues — don’t use one.

Gore was one of four players at quarterback that totaled 110 passing yards as the Golden Eagles (2-9, 1-6 Conference USA) dumped Louisiana Tech (3-8, 2-5) in its last home game of the year.

Southern Miss’ quarterback depth chart has been ravaged by injuries and it came into the game ranked last among 130 FBS teams in total offense. It had not scored more than 19 points against an FBS team this season. The struggles led first-year head coach Will Hall to ditch his traditional offense in favor of the wildcat offense, in which a running back lines up at quarterback.

Though listed as a running back, Gore was 4-of-8 passing for 75 yards with a pick and ran for a score. His TD passes — the first of his career — of 9 and 39 yards to Jason Brownlee contributed to a 21-9 halftime lead.

Averie Habas returned an interception for a touchdown with 1:32 remaining to seal the victory.

Willis was 3-for-3 passing for 32 yards. Southern Miss’ makeshift QB unit combined to complete 8 of 13 passes for 110 yards and three touchdowns. Southern Miss had nine passing touchdowns all season prior to Friday’s game. Its 184 rushing yards marked the second-highest single-game total of the year.

Marcus Williams Jr. ran for 88 yards on 17 carries for Tech.

Southern Miss will finish its season next Saturday, at home against Florida International.