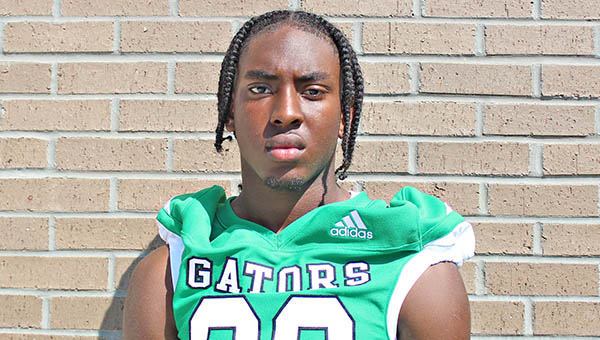 Vicksburg High running back Otis James scored his team's only touchdown in a 42-6 playoff loss to West Point on Friday.

One day soon, the Vicksburg Gators aspire to be a dominant football program like West Point that goes deep into the playoffs and wins championships year after year.

They’re not there yet.

“When you go out and play an established program like West Point, you’ve got to be ready to play a physical 48-minute game of football. I believe our eyes were a little bit intimidated when we went on the field,” Vicksburg coach Todd McDaniel said. “They were extremely physical. We wanted to play a physical game, and they were much more physical than us tonight. Hats off to them. They’re where we’re striving to be. Hopefully we’ll get there.”

West Point (10-0) advanced to the Class 5A semifinals for the sixth consecutive season. It will play Neshoba Central for the North State championship next week. Neshoba Central beat Lafayette 23-20 in another second-round game Friday.

Vicksburg, meanwhile, finished 7-5 but with a bright future. The Gators had their first winning season since 2016 and won their first playoff game since 2008 when they beat Cleveland Central last week. Nearly their entire starting lineup will return in 2022, and many will also be back in 2023.

McDaniel said he hopes his players take Friday’s loss and use it as fuel during the offseason.

“I’m proud of my kids and how they played this entire season. It’s a process. It’s a building block for this program. We got an opportunity to see where we need to be,” McDaniel said. “It was a measuring stick. We have the majority of our team coming back. We’re still very young. As soon as we get back from Thanksgiving break we’ll get back in the weight room and start building for next year. It’s going to be a year-round thing, and I’m excited about where we’re heading.”

Where West Point is heading is the North State championship game — again.

Vicksburg quarterback Ronnie Alexander threw an interception on the first play from scrimmage, and two plays after that Keshawn Henley broke a 42-yard touchdown run to give the Green Wave a 7-0 lead just 43 seconds into the game.

“We tried to run a little waggle and catch them off guard. We were open for a bit, but we delivered the ball a little bit too late and it went downhill from there,” McDaniel said.

Henley added a 3-yard TD run in the final minute of the first quarter, and Cameron Young had a 4-yard TD in between. Young also scored on a 14-yard run midway through the second quarter to put West Point ahead 28-0, and it was pretty much over at that point.

“They ran two plays all night. Power left, power right, and toss. Defensively, they were more active than we were. They did an extremely good job dominating the game tonight,” McDaniel said.

Otis James scored on a 1-yard run on the final play of the game to help the Gators avoid the shutout and perhaps give them a bit of a lift going into the offseason.

“The kids kept fighting and I’m proud of them,” McDaniel said. “West Point was just a little too much for us.”