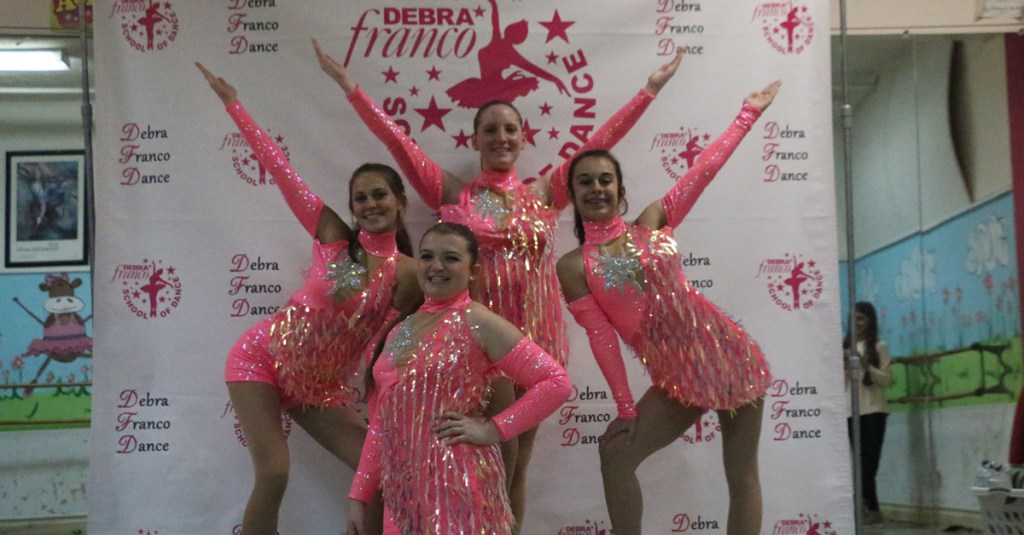 Local dancers pose in the costumes they will be wearing in the 95th celebration of the Macy's Thanksgiving Day Parade. Pictured are: front, Gabby Andrews; left, Laura Bailey; right, Helena Wallace and back, AnneMarie Jeffers. (Photo by Terri Cowart Frazier | The Vicksburg Post)

With all the fancy floats, big balloons and marching bands, it’s no wonder that watching the Macy’s Thanksgiving Day Parade has become a tradition for many families.

There will also be nine performance groups in the parade — including four local teenagers.

“Participating in the parade is by invitation only,” Debra Franco said.

Franco is the owner of the Debra Franco School of dance, and this is the fourth time she has taken students to New York City to participate in the parade.

“I’ve been taking girls since 2004, but we don’t go every year,” Franco said. “We try to do every four years so that all my high school students can have the experience if wanted.”

Last year would have been the year to go, but because of COVID-19, performance groups did not participate in the parade.

Franco said she did extend an offer to her 2020 graduates to go this year since they lost out on their opportunity, but they could not because of college commitments.

This will mark Spirit of America’s 35th year to showcase dancers and cheerleaders in the parade.

To prepare for the performance, Franco said, her students were sent a video link with the choreography.

“The girls have been working hard on it,” she said, adding that upon arrival in New York, they will continue to rehearse with the other dancers.

Rehearsing will not be the only thing the dancers will be doing while in New York. The group will be allowed free time to sightsee and visit many of the city’s iconic locations.

“I am super excited to see everything there, like all the historical things and the museums and stuff,” Jeffers said.

“I’m most looking forward to Broadway shows,” Andrews said. “Just thinking about it makes me want to jump up and down. I’ve never been to a Broadway show, and it has been a dream of mine.”

“I’m most excited to see the Rockettes dance,” she said.

Bailey, who like the rest of the girls has never been to New York, said she is just excited about having the opportunity to visit the city.

Between rehearsals and free time activities, the dancers will be busy, especially with their 6 a.m. costume check and final rehearsal on Thanksgiving morning.

At 6:30 a.m., the dancers will head out to begin lining up for the start of the parade.

To stay warm while waiting for the parade to begin, Franco said, in the past dancers have used heat sheets, but this year, they will be allowed to wear sweatsuits over their costumes until the parade gets underway.

The Macy’s Thanksgiving Day Parade kicks off at 9 a.m. and once the Spirit of America Dance Stars reach Herald Square, they will perform for the live crowd as well as be broadcast live on NBC.

So be sure and keep your eye out for the four local dancers — they will all be in pink.