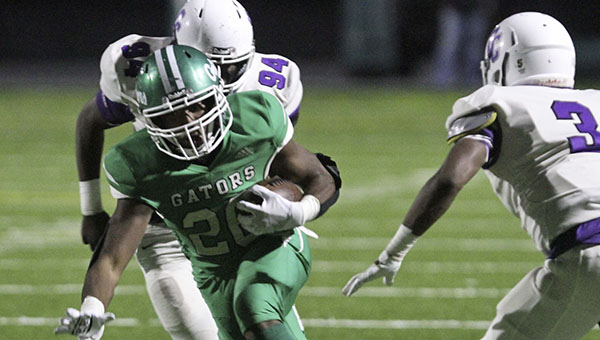 Vicksburg High running back Otis James (26) was selected as the Offensive MVP of Region 2-5A. James ran for 1,041 yards and 11 touchdowns this season. (Paul Ingram/For The Vicksburg Post)

Six Vicksburg players earned individual awards and 16 more were selected to the All-Region 2-5A team in voting by the league’s coaches.

Running back Otis James was named the Region 2-5A Offensive MVP. The senior emerged as the leading rusher in a multi-pronged attack, with a team-high 1,041 yards and 11 touchdowns on 108 carries. He averaged 9.6 yards per carry.

Another back, sophomore Malik Montgomery, finished with 808 yards and 10 touchdowns in only nine games and was selected as Region 2-5A’s Most Outstanding Running Back.

Senior Jaquez Williams was Region 2-5A’s Most Outstanding Offense Lineman after anchoring an offense that averaged 293.2 rushing yards per game.

The Gators’ defense was a driving force in their turnaround from a two-win season in 2020 to a 7-5 mark this year, and two players on that side of the ball also earned individual awards. Defensive back Jaleel Fleming and outside linebacker Kellen Washington were both named the best at their respective positions. Fleming had 32 tackles and 10 interceptions, and broke up another seven passes. Washington had 50 tackles, 10 for loss, five sacks and two fumble recoveries.