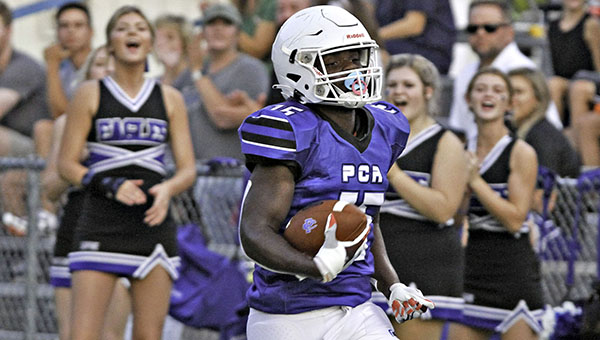 Porter's Chapel Academy running back Tyler Washington sprints toward the end zone in the first half against Discovery Christian. (Paul Ingram/For The Vicksburg Post)

Porter’s Chapel Academy’s best football season in more than a decade has led to a well-earned accolade for several players.

Purvis will be the head coach for the White team, which will take on the Blue at 2:30 p.m. on Dec. 3 at Jackson Prep. All three of his players will also be on the White team.

PCA’s three all-star selections matches the total it had from 2012-20 combined.

“I think it shows the step we’ve taken in our program. I believe this is the most we’ve ever had selected to play,” said Purvis, who was an assistant coach in the 2020 all-star game and led the Eagles to a 6-5 record this year ­for their first winning season since 2008. “It’s a nice recognition for our guys and a good reward for the season they had.”

Washington finished an outstanding high school career as one of the top rushers in school history. He had 1,341 rushing yards and 21 touchdowns this season, giving him 3,061 yards and 38 touchdowns for his career. Both career totals rank second in PCA’s nearly 50-year history. 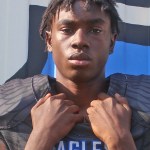 Washington is also just the 10th running back in Warren County history to have more than 20 touchdowns in a season, and the 12th to reach 3,000 career yards. His 38 touchdowns are tied for seventh-most on the county’s career list.

“He was exactly what we thought he would be, and what we needed him to be,” Purvis said. “When we needed yards, we called his number.”

While Washington had the numbers, Rogers might have been PCA’s most valuable player based solely on his versatility. He played nearly every position on the field on both offense and defense, from serving as Washington’s lead blocker as a fullback to a game-breaking deep threat at receiver.

Rogers led the Eagles with 44 receptions for 686 yards and nine touchdowns, and added 199 yards and five TDs rushing. On defense, he had 54 tackles and six takeaways — three interceptions and three fumble recoveries — and one punt return touchdown.

“Willie’s versatility was a key for us,” Purvis said. “As a receiver, ball carrier, and then a lead blocker for Tyler, and then everything he did on defense. He was our guy that could fill whatever hole we had to fill, and he did it all really well.”

Williams, meanwhile, was PCA’s top lineman on both sides of the ball. He had 20 tackles and three sacks on defense, and on offense was a strong run blocker and pass protector. PCA only gave up eight sacks on nearly 200 passing plays this season. 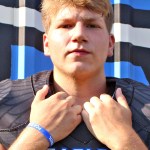 “He anchored our line. He made sure we were in the right calls and protections. It’s not something that registers on the stat sheet, but it’s no doubt a factor in the success that we had,” Purvis said.

The 1A-2A-3A all-star game will be played under 11-man rules, but includes a number of 8-man players from the Class 1A and 2A ranks.

In addition to the PCA players, several others from schools in the Vicksburg area were picked.

Running back Paul Michael Machen was the lone representative from Tallulah Academy. He rushed for 1,543 yards and 17 touchdowns this season while leading the Trojans to the second round of the Class 2A playoffs.

The Class 4A-5A-6A All-Star Game will also be played Dec. 3 at Jackson Prep, at 5 p.m. No St. Aloysius players were picked, but Central Hinds linebacker Luke Knight was selected to play on the White team.