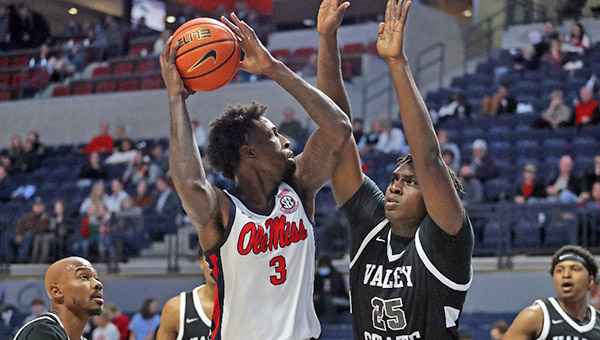 OXFORD (AP) — Nysier Brooks scored 12 of his 15 points in the second half, when Robert Allen scored all of his 11, and Ole Miss defeated Mississippi Valley State 73-58 on Friday.

Mississippi Valley State put together a 17-2 run late in the first half for a seven-point lead and went into halftime up 38-33.

Allen scored the last four of a 9-0 run to open the second half to give the Rebels a 42-38 lead. After two Delta Devils free throws he made the next two hoops and Brooks scored to make it 48-40.

Robert Carpenter, who made 5 of 7 3-pointers and scored 27 points, keyed an 8-0 run to pull Mississippi Valley within 53-52 midway through the second half. That ended the Delta Devils’ threat as the Rebels reeled off 11 straight points to start a 20-3 run.

Caleb Hunter scored 14 for Mississippi Valley (0-3) and Devin Gordon 10. The Delta Devils went 2-of-9 over the final nine minutes, with four turnovers.

Ole Miss hosts Rider on Tuesday before meeting No. 9 Memphis next Saturday.