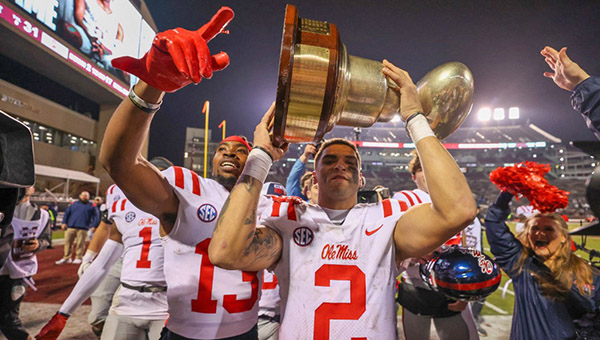 As they lifted the Golden Egg on their archrival’s home turf and sang along with the band, the enormity of what the Ole Miss Rebels had accomplished was not lost on them.

Not just beating Mississippi State in the Egg Bowl. Not just doubling their win total from a year ago. But winning 10 regular-season games for the first time in school history and likely locking up a berth in a New Year’s Six bowl game, they soaked in the moment as surely as the Thanksgiving night rain soaked their uniforms.

“Not only is this a big win for our rivalry and Ole Miss, but we also go down in history because Ole Miss has never had a 10-win regular season. That is a good feeling when a program has not done something in a long time, and you do it,” Ole Miss quarterback Matt Corral said. “Also, to do something that has never been done in the history of this school, that is something special and it speaks a lot for the people in this locker room.”

Corral completed 25 of 33 passes for 229 yards and one touchdown, and added 45 yards and another touchdown rushing as Ole Miss defeated Mississippi State 31-21 in the Egg Bowl on Thursday.

It gave the Rebels a four-game winning streak, and ended the most successful regular season in the program’s long history. Ole Miss had not won more than six games in a season since 2015, when it finished 10-3 and beat Oklahoma State in the Sugar Bowl.

“Before we got here, these fifth- and sixth-year seniors, what they have been through to get to this point. To watch them sing there at the end and enjoy it is really neat,” Ole Miss coach Lane Kiffin said. “I have been telling them all week, ‘You can do things that are special, but it is really special when you can do something that has never been done before.’ They have never won 10 regular season games. For this group of players and assistant coaches to do that is really cool.”

New Orleans and the Sugar Bowl could be the Rebels’ postseason destination this season as well. They could also wind up in Atlanta for the Peach Bowl or Arizona for the Fiesta Bowl. Their assignment will be determined next weekend, after the field is set for the College Football Playoffs.

Ole Miss is ninth in the current CFP rankings. With eight spots remaining after the four playoff teams are picked, it seems almost certain they will go to one of the more prestigious bowls ­— or at least that’s how Kiffin was treating it.

“Well, I hope we are because they all celebrated like we are. I would have some really upset players if they went 10-2 in the SEC and aren’t,” Kiffin said. “It is remarkable what these kids did. They call themselves a band of brothers, and they really are. It is just really special. Again, never (winning) 10 regular season games and to do it. Football has been played here a long time, and the SEC is as strong as ever. There are more SEC teams than there used to be so it is even harder. It is a really, really special deal.”

So is beating Mississippi State.

The Rebels muddled through the first half, taking a 10-6 lead on Snoop Conner’s 1-yard touchdown run with 2:21 left in the second quarter, before blowing it open in the second half.

A defensive stop aided by several Mississippi State miscues allowed the Rebels to take their slim lead into halftime. Then Conner scored on another 1-yard run on their first possession of the second half, and Corral ran it in from 4 yards out early in the fourth quarter to make it 24-6.

After Mississippi State got a touchdown back on an 11-yard pass from Will Rogers to Jaden Walley, Corral threw a 15-yard TD pass to Jerrion Ealy with 5:35 remaining to ice it.

Ealy finished with 103 total yards — 60 rushing and 43 receiving — and one touchdown. Conner ran for 54 yards and two TDs, and the Rebels had 159 rushing yards as a team. Dontario Drummond caught 13 passes for 133 yards.

“Our defense really bent and didn’t break all day. Keeping them to all of those field goal attempts was huge,” Kiffin said. “Our offense struggled early. Those are really good defensive players. I said it all week and you saw it in warmups. They are really long. They have recruited extremely well there on defense and you can see it. It is not easy, but guys rose to the occasion and found a way to win.”

Ole Miss surges past Mississippi State in the Egg…