Ole Miss surges past Mississippi State in the Egg Bowl 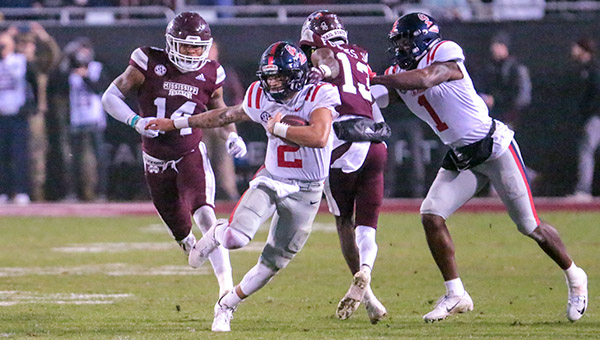 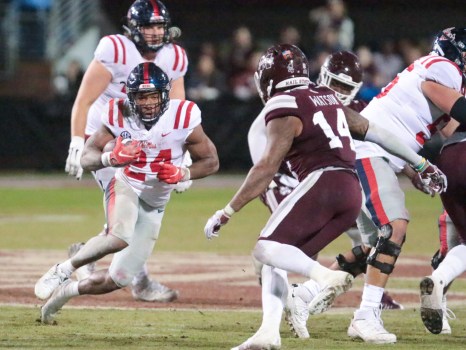 Ole Miss running back Snoop Conner (24) carries the ball Thursday against Mississippi State. Conner rushed for 54 yards and two touchdowns to lead the Rebels to a 31-21 victory. (Walter Frazier/For The Vicksburg Post) 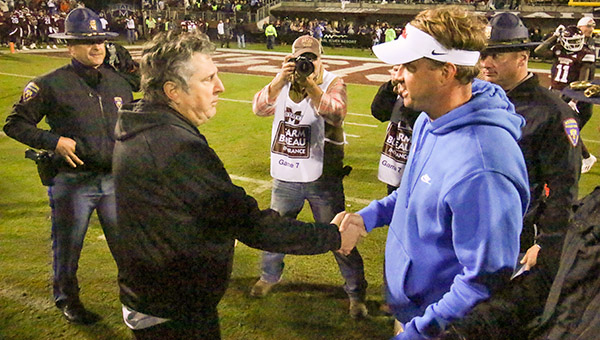 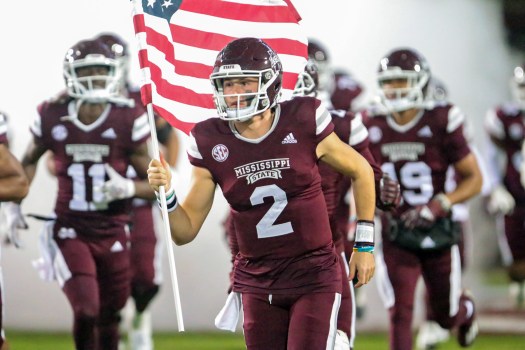 Mississippi State quarterback Will Rogers (2) leads the Bulldogs onto the field for the Egg Bowl against Ole Miss on Thursday. (Walter Frazier/For The Vicksburg Post) 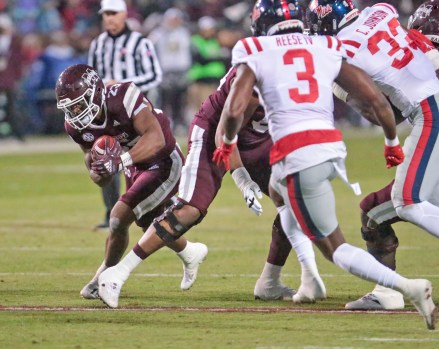 Mississippi State running back Dillon Johnson (23) tries to get through the Ole Miss defense. (Walter Frazier/For The Vicksburg Post) 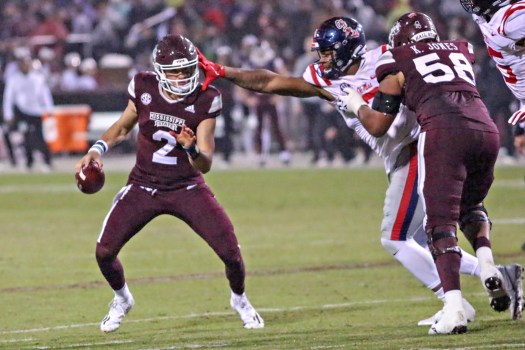 Mississippi State quarterback Will Rogers (2) tries to avoid a sack in the Egg Bowl against Ole Miss on Thursday. (Walter Frazier/For The Vicksburg Post)

STARKVILLE (AP) — A sluggish first half gave way to a golden finish for Ole Miss.

“What a cool night. What a cool win. We’re happy and relieved,” Ole Miss coach Lane Kiffin said. “It wasn’t easy. But our players found a way to win and that’s what matters. We’re at 10 wins and that sounds really cool.”

Matt Corral ran for a touchdown and passed for 229 yards to help Ole Miss (10-2, 6-2 Southeastern Conference) overcome an early 6-3 deficit for a 24-6 lead early in the fourth quarter. Corral was 25-of-33 with an interception.

The Rebels won a school-record 10 regular-season games and wrapped up second place in the SEC West. A New Year’s Six appearance appears likely, accompanied by a Top 10 ranking.

“I was with this team when we were 5-5 and we had losing records. It was in us. We just needed people to bring it out of us,” Corral said. “We bonded together and we’re stronger. And it shows.”

The Rebels had 388 yards of total offense, with Conner scoring twice on 1-yard runs during the decisive outburst. He rushed for 54 yards on 14 carries.

Mississippi State’s Will Rogers was 38-of-58 passing for 336 yards and an 11-yard touchdown pass to Jaden Walley in the fourth quarter. The Bulldogs (7-5, 4-4) added an 11-yard touchdown run by Jo’quavious Marks with 2:27 remaining, but could not pull within single digits. Their final drive ended when Rogers was tackled inside the 5 on an untimed down at the end of the game.

The Bulldogs had 420 yards of total offense, primarily in the final period in the belated rally, but had trouble translating yards into points.

Makai Polk had 10 receptions for 98 yards and added a two-point conversion. Nolan McCord had field goals of 34 and 29 yards.

Trailing 10-6 in the second quarter, Mississippi State missed an opportunity to take the lead before halftime by dropping three potential touchdown passes. Lideatrick Griffin and Jo’Quavious Marks could not hold on to accurate tosses from Rogers inside the red zone, followed by a missed 33-yard field goal attempt by McCord. The empty scoring drive loomed large as Ole Miss built a 24-6 cushion early in the fourth quarter.

“We haven’t dropped three balls in a row for a long time. I think sometimes we’d be seven points better, but everyone was locked in. In a game like this, it’s a fine line between being wired up and being too discouraged. People overly go flat because they don’t care, and in a game like this, everyone cares,” Leach said. “But when you care too much and try too hard, then you get out of control and then you get too discouraged. I didn’t see that out of our team, but I did think we tried too hard and missed some opportunities, which is just too bad.”