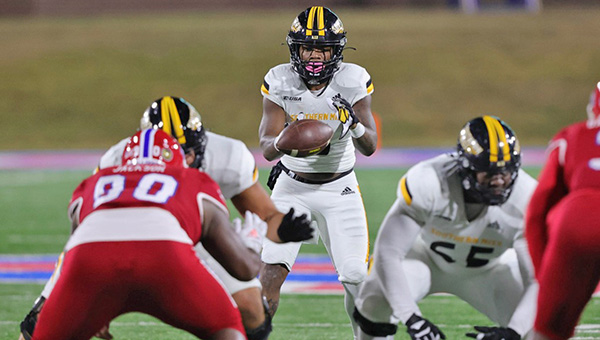 For two months, Southern Miss was clawing through the abyss of a miserable football season.

Loss after loss piled up behind a stagnant offense that couldn’t move the football at all. Coach Will Hall talked of a brighter future ahead, but the present was one of the darkest times in the program’s recent history.

Then a superhero — or, more accurately, a super back — arrived on the scene to save the day.
Hall’s shift away from using a traditional quarterback to having a different skill player take the snaps has put a spark into the offense and the team.

The Golden Eagles nearly knocked off No. 22 UTSA on the road and then snapped an eight-game losing streak by beating Louisiana Tech last week. They can finish the season on a high note, and with a rare winning streak, by beating Florida International (1-10, 0-7 Conference USA) in Saturday’s season finale in Hattiesburg.

“It would just be huge for us. When’s the last time we had a win streak here?” Hall said of the prospect of finishing with back-to-back victories. “To finish the year right, you want to finish well. We won a huge rivalry game, a game that means so much to so many of our people and then to win another one going down the stretch, finish the year with two straight wins with everything we’ve been through, going into the offseason, I think would just show a lot of naysayers the trajectory of this program.”

Southern Miss ranks 129th out of 130 FBS teams in total offense, and is 126th in scoring offense at 15.9 points per game. The point total has been bolstered by the defense, which has scored a touchdown in three consecutive games.

USM’s quarterback depth chart was ravaged by injuries as well — three different QBs have been lost for the season — which forced Hall to adjust on the fly. He switched to the “super back” offense that rotates different running backs and receivers at the quarterback position.

Running back Frank Gore Jr. and freshman defensive back Antavious Willis have been the two main QBs in the new system, but five players took snaps in the 35-19 win against Louisiana Tech.

“It’s what we’ve always called that position through all my years coaching. It’s really a guy who plays in the slot and in the backfield,” Hall said. “Obviously, he has the skill set where he can play Wildcat quarterback. We’ve used it forever, everywhere we’ve been and, obviously, it’s kind of taken on a whole new meaning with the adversity we’ve had this year.”

The Golden Eagles used their new offense to hang in until the end before losing 27-17 to UTSA, and had a lot more success against Louisiana Tech.

Gore and Willis combined for three touchdown passes, the most the Golden Eagles have thrown in a game this season. The 184 rushing yards they piled up was the second-highest total this season.

Although a bit more productivity is welcome, Hall said a bigger change the last two weeks has come in the players’ attitude. He noted how the Golden Eagles answered the bell with a game-clinching touchdown drive after Louisiana Tech scored 10 straight points to cut the score to 21-19 in the fourth quarter was the type of thing that would not have happened not long ago. USM won the game 35-19.

“That’s what winning teams do,” Hall said. “That’s what Alabama does week in and week out, when the game is on the line they find a way to make a play. That’s a learned trait, and we’re learning how to do that and that was huge, man.”

As excited as Hall is about the future, he was just as eager to send his seniors out as winners.

“Excited about senior day this week where we can honor a bunch of young men that didn’t quit on this university through a lot of tough times when a lot of people would,” Hall said. “We want to honor them this week, we’ve got to prepare the right way and try to get another win and send them out the right way. That’s what we’re concentrating on.”