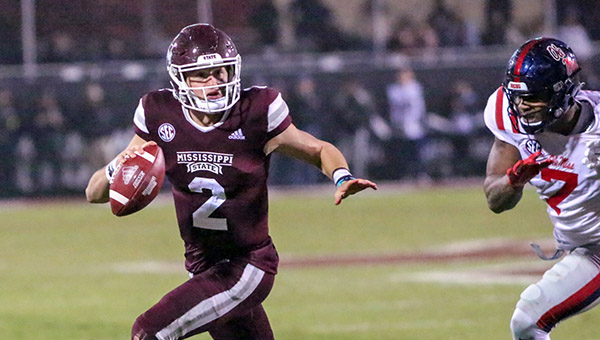 Mississippi State quarterback Will Rogers (2) scrambles in the pocket against Ole Miss. Rogers threw for 336 yards and one touchdown, but the Bulldogs lost 31-21. (Walter Frazier/For The Vicksburg Post)

If Mississippi State’s 2021 season could be boiled down into one drive, it might have been the final one of the first half Thursday against Ole Miss.

With a chance to take the lead, the Bulldogs dropped three potential touchdown passes, missed a field goal, and came away empty-handed. It felt a lot like a season in which the program clearly took a step forward but also missed opportunities to go further.

The Bulldogs (7-5, 4-4 SEC) beat four ranked opponents and will play in a bowl for the 12th consecutive season. They also misfired in a couple of big spots, including a 31-21 loss to No. 9 Ole Miss.

“I think we improved more than any team in the conference. It wasn’t satisfactory for us from the standpoint that we could have done a better job than we did. We certainly think we left a lot of meat on the bone as far as opportunities,” Bulldogs head coach Mike Leach said. “We steadily improved the entire year. We beat a lot of ranked teams, and lost to a couple of them. Don’t get too tired of these

guys because we are going to see nearly all of them next year.”
Leach took over in the pandemic-marred 2020 season and started an overhaul of the roster that bore fruit this year.

Sophomore quarterback Will Rogers set the school’s single-season record for passing yards and touchdowns, and other underclassmen at the skill positions like receiver Makai Polk and running backs Jo’quavious Marks and Dillon Johnson emerged as big-time playmakers.

Only about a half-dozen starters will depart at the end of the season.

Mississippi State went 4-7 in the shortened 2020 season, and won seven games this year with the chance for another. Its bowl assignment will be announced after the final College Football Playoff rankings are determined next weekend.

Leach said the next month will help the Bulldogs get a jump on 2022.

“It’s kind of like summer camp with football. As a coach, you are flying around chasing recruits and then squeezing in practice when you can,” Leach said. “It’s really the beginning of spring ball. If you are in a bowl game then you get two spring balls, not just one. It’s the beginning of spring ball, and we are looking forward to working our young guys a lot and then sharpening up our older guys after they rest up a bit.”

One thing the Bulldogs might try to strive for next season is a more even flow to the season. They overcame deficits of 20 and 25 points — both school records — to beat Louisiana Tech and Auburn, respectively. They defeated ranked opponents in North Carolina State, Kentucky, Texas A&M and Auburn.

The Bulldogs also were blown out by Alabama, lost back-to-back games against Memphis and LSU early in the season, and missed three field goals in a 31-28 road loss at Arkansas.

The Egg Bowl against Ole Miss also slipped away to a degree. Mississippi State’s defense got a fourth-down stop in Ole Miss territory on the opening drive, but the offense was only able to get three points.

A 13-play drive later in the first quarter netted another field goal, and Nolan McCord missed two field goals in the second quarter.

The second missed field goal came after MSU receivers dropped three potential touchdown passes in a row while the team trailed 10-6. Ole Miss went on to score three touchdowns in the second half to take a 24-6 lead.