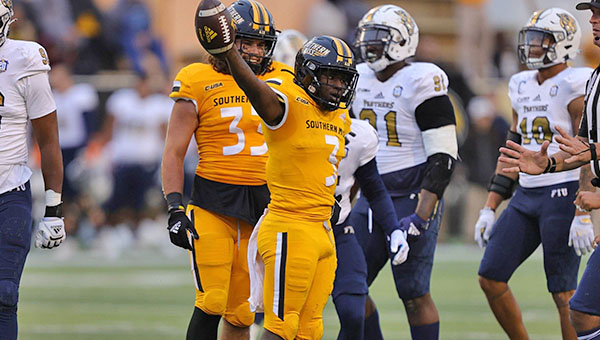 HATTIESBURG — Saturday’s season finale between Southern Miss and Florida International, two struggling teams whose hopes of playing in a bowl game died in October, wasn’t even a blip on the national radar.

For Southern Miss, however, it meant the world.

Frank Gore Jr. threw two touchdown passes and ran for two more scores, Dajon Richard ran for 107 yards and a touchdown, and Southern Miss finished its season with a 37-17 victory over FIU at M.M. Roberts Stadium.

Southern Miss (3-9, 2-6 Conference USA) wrapped things up with a two-game winning streak after losing the previous eight. It scored 35 and 37 points in its two wins, after only scoring more than 19 once in the first nine games.

“Really good way to end the year. I’m really proud of these kids and the way they’ve battled,” Southern Miss coach Will Hall said. “It’s been well documented how short-handed we are, all the stuff these kids have been through, not just this year, but over the last two years. They hung together and they kept representing this university the right way.”

Southern Miss’ late-season surge, which included two wins and a close loss to nationally-ranked UTSA, coincided with Hall’s move to the “super back” offensive system. Hall inserted Gore, normally the team’s best running back, at quarterback and an offense that ranked dead last among 130 FBS teams suddenly found life.

Gore ran 13 times for 68 yards on Saturday, and the Golden Eagles had a season-high 322 rushing yards as a team. Former Warren Central star Demarcus Jones also gained 90 yards on nine carries and Antavious Willis had 60 yards.

Gore and Willis, the other “super back” quarterback, combined to complete 8 of 9 passes for 122 yards and two touchdowns, both to Jason Brownlee. Gore threw a 34-yard TD to Brownlee in the first quarter to help Southern Miss jump out to a 21-0 lead, and then another 34-yarder to Brownlee midway through the fourth to help put the game on ice.

Gore finished the season 10-of-16 passing, for 355 yards and four touchdowns in three games behind center. His yardage and touchdown total were second on the team. Southern Miss had 12 players attempt at least one pass this season, and seven of them threw at least four.

“I’ve been asking coach (Hall) since the beginning of the season, just joking around,” Gore said of playing quarterback. “We never knew this was going to happen, but it happened and we had to make the best of the opportunity and just get some wins for this team and for this program.”

FIU (1-11, 0-9) lost 10 straight games to close out the season after beating FCS-member Long Island University 48-10 in the opener. It rallied after falling behind big against Southern Miss, but never held the lead.

Bortenschlager got FIU on the scoreboard with a 91-yard TD pass to Tyrese Chambers with 58 seconds left in the first quarter. It was the longest TD pass in FIU history.

Lexington Joseph scored on an 8-yard run early in the second quarter, and Chase Gabriel kicked a 26-yard field goal in the third to pull the Panthers to within 24-17.

Southern Miss fumbled on the ensuing kickoff, but Gabriel missed a 42-yard field goal that could have cut deeper into the deficit.

“After they scored their first touchdown, our momentum kind of shifted down. People started to get down like we were losing, but we fixed it and didn’t give up too many more points,” said Southern Miss defensive back Jay Stanley, who had six tackles, a forced fumble, a fumble recovery, and an interception.

After Gabriel’s miss, the Golden Eagles took advantage. Gore capped a 12-play, 75-yard drive with a 5-yard touchdown run that put them ahead 31-17 with 10:37 left in the game.

Florida International turned it over on downs at its own 34-yard line on its next possession, and Gore threw his second touchdown pass to Brownlee on the next play to make it 37-17 with 8:45 to go.

FIU’s last four possessions ended with a missed field goal, a turnover on downs, a punt and an interception. Bortenschlager completed 13 of 24 passes for 231 yards, with one touchdown and two interceptions. He was sacked four times. Joseph ran for 105 yards and a TD on 16 carries.

“It feels pretty good,” Stanley said. “It’s been a long season. We took a lot of close losses that we felt like we could have won. It feels good to finally put together a stretch of games that we are proud to put on tape.”

Hall echoed those thoughts. To finish with a pair of wins and some positive momentum heading into the offseason brought a joyful conclusion to a largely forgettable season.

“Our kids, they just rallied together, they’ve played the right way. Our young kids are really bought into where we’re going, they’re really talented, they’re helping us recruit,” Hall said. “And then our older kids, man, they’re leaving a legacy, and I’m so proud of the legacy they’ve left. They left beating up a big-time rival, which our fans do not like at all and then winning this last game at home to win two in a row and go into the offseason on a high note.”