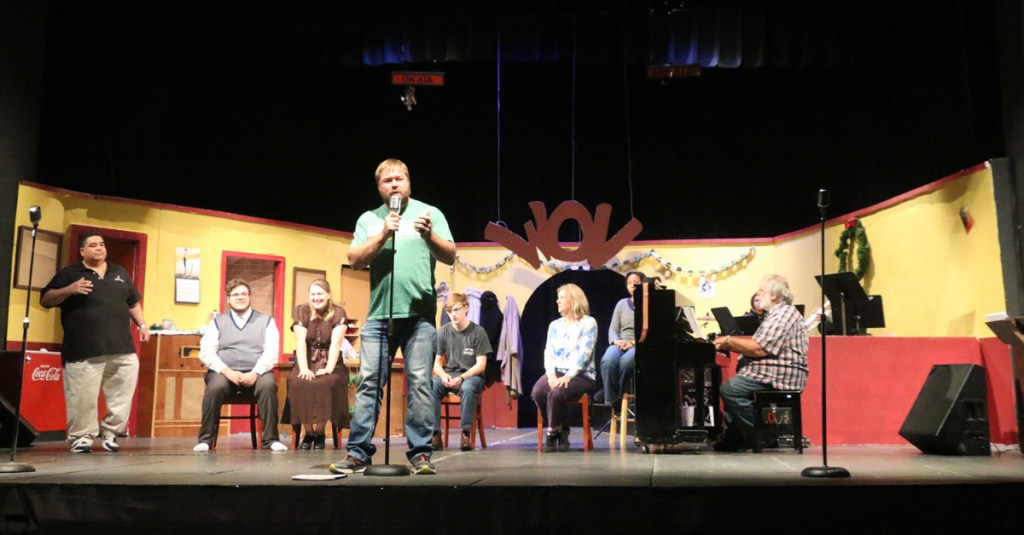 Before TVs were in every home, before there was the internet, cell phones Facebook or social media of any kind, There was the radio.

For many, radios provided entertainment, and in the evening, families would gather around and listen to their favorite shows like “Amos and Andy” and “The Bell Telephone Hour.”

The Vicksburg Theatre Guild is inviting everyone to take a step back in time when radios ruled the airwaves in their upcoming performance of the “1940s Radio Hour.”

“This is a musical about a radio show performed on Dec. 21, 1942,” director of the VTG production Missy Tello said. “With the first 20 minutes dedicated to the cast getting ready to put on a live broadcast of the Mutual Manhattan Variety Cavalcade from the Hotel Astor’s Algonquin Room.”

With the country being in the throes of World War II, Tello said, the show portrays not only the celebration of the holidays but also the challenges of those struggling.

One of the characters in the musical, Pops, lives at the radio station’s studio, Tello said, but doesn’t want anyone to know.

“The show starts with just him on the stage sitting in a dimly lit radio studio, but as each character comes in, the lights come up a little more,” Tello said, conveying the brightening of his mood.

But there is a bit of chaos on stage, and radio station general manager Clifton Feddington, played by Richard Hunt, is fit to be tied.

Feddington has a drunk lead singer, a worrisome delivery boy aiming to make his debut, a performer who is vying to sing a ballad and a trumpet player who is set to leave for the war.

The mayhem is hilarious, but second to the number of tunes performed that harken back to the era including “Boogie Woogie Bugle Boy,” “Strike Up the Band,” “Ain’t She Sweet” and “Blue Moon.”

“One of my favorite scenes is in Blue Moon,” Tello said.

Tello’s son, who plays percussion in the show, gets to heckle Mitch Cochran, who is a preacher in the production.

“Mitch is a good sport about it, but it tickles me to see it play out,” she said.

The VTG’s production of the “1940s Radio Hour” is comprised of a 13-member cast and a 12-piece orchestra directed by Dr. Paul Ballard.

Also, Burnley Cook, who is a Natchez native, plays Zoot Doubleman, the pianist in the production.

Tello said Cook has been playing the piano for 52 years and has a resume consisting of multiple theater productions, where he has served as director, musical director and pianist. He was employed for four years as the technical director of the Natchez Little Theatre and he is a piano technician, tuner and rebuilder, she said.

“He said he has enjoyed coming up here,” Tello said, and being part of a VTG production.

“My family performed in this musical 10 years ago, and I wanted to bring this play to VTG to hopefully give it a bigger audience because I fell in love with the play. It reminds me of stories told to me by my parents, who lived through these times,” she said.

Tello said she sees this musical as her “Christmas gift to the community,” Where they can experience live music and an entertaining play with their family and friends.

“I hope people leave humming one of the songs and feeling closer to those that they love. Oftentimes, the best gifts aren’t under the tree, but they are the experiences you have with family and friends,” she said.

The “1940s Radio Hour” is part of the VTG’s season membership.