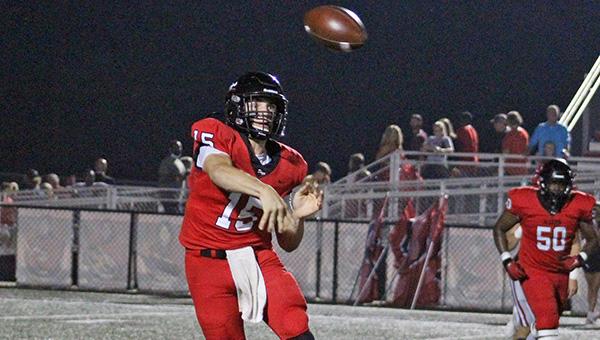 Brandon quarterback Landon Varnes throws a pass in the first quarter against Warren Central in October. Varnes and the Bulldogs will play Madison Central in the MHSAA Class 6A championship game Friday at 7 p.m. in Hattiesburg. (Ernest Bowker/The Vicksburg Post)

1
Two teams with a long history of playoff frustration will finally get their shot at a state championship.

Madison Central and Brandon, who have combined for 34 playoff victories since 2010 — but only one state championship game appearance — both broke through in the MHSAA Class 6A semifinals.

Madison Central (12-1) defeated Starkville 34-14 to reach its first state championship game since winning its lone title in 1999. The Jaguars had reached the semifinals nine times since then.

Brandon (11-2), meanwhile, thwarted a two-point conversion attempt by Oak Grove in the final minute to win 21-20 in the South State championship game. The Bulldogs have won at least one playoff game in 10 of the last 12 seasons, but this is their first trip to the state championship game since losing to South Panola in 2012.

Madison Central won 42-19 when the teams played on Sept. 3, but Brandon has won 11 in a row since then. They’ve played each other in the regular season every year since 2013, with Madison Central holding a 5-4 lead in the series.

2
While the Class 6A championship game is a totally fresh matchup, the rest of the weekend will feature a mix of familiar faces and teams new to the big stage:

• Class 4A will have a new champion for the fifth year in a row. Senatobia (12-2) takes on Columbia (13-1) Saturday at 11 a.m. in a matchup of teams with one combined championship game appearance this century.

Senatobia is in the final for the first time since 2004, and Columbia’s last appearance was in 1982.

• Jefferson Davis County (9-5), which opened in 2017, will try for its third Class 3A championship in its brief history when it plays Amory (10-3) in the first game of the weekend on Friday at 11 a.m.

Leflore County is the biggest Cinderella story among this year’s finalists. The Tigers won only six playoff games in 23 appearances prior to this year’s run. After beating Potts Camp 28-0 in the first round, they won their next three playoff games by a total of nine points.

• Simmons (13-0) won three straight Class 1A championships from 2015-17, but has struggled to get back to the top of the mountain since then. It lost in the 2018 championship game and in the semifinals in 2020, and is back now seeking a fourth state title against Bay Springs (11-1).

Bay Springs lost in the 2016 Class 2A championship game, and went one-and-done in the playoffs in 2019 and ‘20. Its only loss this season was to Class 2A finalist Scott Central in mid-September. It has allowed 64 points in 12 games, with 26 of those coming against Scott Central.

The Class 1A championship game is Friday at 3 p.m.

3
Southern Miss’ offense enjoyed a late-season spark when coach Will Hall shifted from a traditional quarterback to the “super back.”

With running back Frank Gore Jr., freshman defensive back Antavious Willis and a host of others taking snaps, the Golden Eagles posted their two highest point totals of the season, as well as some of their highest rushing and passing yardage totals.

In Saturday’s finale, a 37-17 victory over Florida International, Gore and Willis combined to complete 8 of 9 passes for 122 yards and two touchdowns. Gore, Willis, Dajon Richard and Demarcus Jones combined for 322 rushing yards, with each player gaining at least 59.

“It’s been fun, but no matter what you do, football’s a math, geography game. It’s about numbers, No. 1, and then No. 2, it’s about angles and leverage,” Hall said. A”nd what this has done the last three weeks is it gave us a numerical advantage in a lot of ways, but then it created angles and leverage for us through our schemes.”

Hall said the super back offense will continue to see some use next season, but he plans to return to a traditional offense once his quarterback depth chart is restored to full strength.

“We’ve got a young man named Ty Keyes who’s really good at playing quarterback. We’ve got the No. 1 quarterback in the state of Mississippi coming in and we may add a transfer, you know what I’m saying?” Hall said. “We’re heavily recruiting those to bring an older guy in the room so we’re not so young. But we’re going to be a quarterback-driven program.”

4
Ole Miss continued to roll the dice on fourth down in its 31-21 Egg Bowl victory over Mississippi State on Thanksgiving night.

The Rebels went 1-for-3 on fourth down, which kept them among the national leaders in fourth down conversion attempts. They finished the regular season with 42, which was second only to South Alabama (47) among 130 teams in the Football Bowl Subdivision. Air Force (40) ranks third.

Ole Miss was successful on 26 of its tries, for a 61.9 percent conversion rate that ranked 35th nationally. Northern Illinois leads the country with an 82.6 percent (19-for-23) success rate.

Ole Miss was only 3-for-12 on fourth down in its last five games. Its one conversion against Mississippi State, on a fourth-and-4 early in the fourth quarter, led to a touchdown run by Matt Corral that gave the Rebels a 24-6 lead.