St. Al blows past ACCS on the pitch 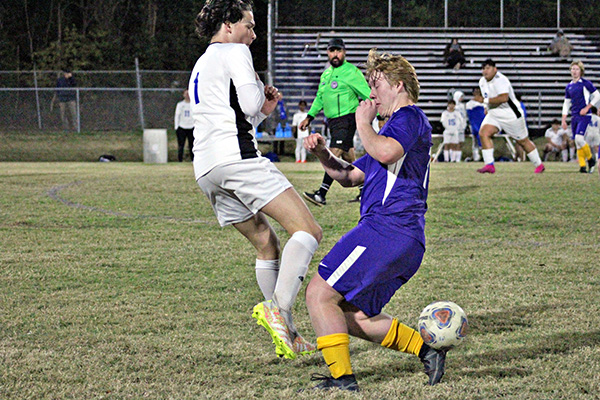 ACCS' Brody Watts (1) and St. Aloysius' Thomas Dowe collide as they battle for the ball in the second half of Monday's game. (Ernest Bowker/The Vicksburg Post)

After starting the season with back-to-back losses, St. Aloysius took out some of its frustration with a bit of controlled aggression.

Cooper Madison and John Ellis Montgomery scored two goals apiece, and St. Al rode a big first half to a 5-0 victory over Adams County Christian School in a boys’ soccer match on Monday.

St. Al (1-2) earned its first win of the season as it began a stretch of six games in 10 days. The Flashes will play at Central Hinds Wednesday at 3:30 p.m., and then host Hartfield Academy and Washington School next week.

“We’ve had two rough games. One was against a really good opponent, and the other one we had some guys missing. We’re a young team trying to put it together,” St. Al coach Jay Madison said. “It always makes things better when you win. The tea’s sweeter and the air conditioner is a little colder.”

Cooper Madison, the coach’s son and St. Al’s top offensive threat, got his team rolling with a pair of first-half goals. Montgomery also scored one to stake the Flashes to a 3-0 lead at halftime.

ACCS coach Jeremiah Dent said his team, like St. Al, is still blending its roster together and was simply overwhelmed early in the game.

Both teams settled in for most of the second half. Montgomery scored his second goal off a cross from Cooper Madison in the 67th minute and Will Dowe scored the game’s final goal in the 72nd minute.

“We found a lot of holes in how they were playing and we were able to distribute the ball real well,” Cooper Madison said.