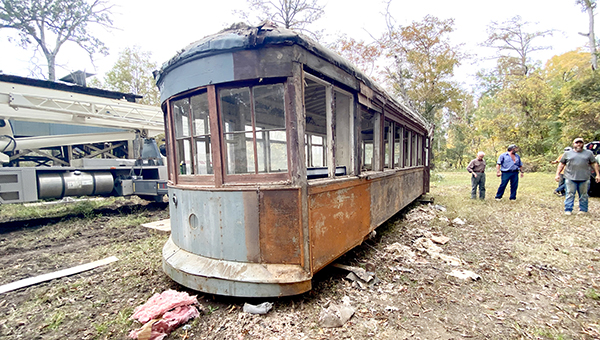 A 1916 Burney Safety streetcar sits on blocks after it was removed from an old home where it served as a porch and kitchen. The streetcar will be refurbished and put on display at the Old Depot Museum using ARPA funds. (File photo | The Vicksburg Post)

Two relics of Vicksburg’s past will find a permanent home at the Old Depot Museum on Levee Street.

The Board of Mayor and Aldermen on Nov. 24 approved $253,154 in American Recovery Plan Act Funds for the museum to rehabilitate and build a display for a 1916 Burney Safety streetcar originally used by the city and a 1900s-era horse-drawn fire wagon owned by the city.

According to the contract between the city and museum director Dave Benway, the cost of refurbishing and displaying the streetcar is estimated at $21,294. Benway also agreed to expand the museum to accommodate the fire department wagon.

“They’ve completely given it to us, lock, stock and barrel,” he said.

An aerial photograph of the museum indicates the streetcar display will be on a set of tracks at the northwest corner of the Yazoo & Mississippi Valley Railroad Depot, which houses the museum.

“It will be a very large display outside,” Benway said. “There’ll be an overhang protecting it from the river and it should prove to be quite an attraction.”

He said the wagon will be on the same track and covered by the overhead.

Benway said Thad Pratt with Vicksburg Woodworks will refurbish the streetcar and build the display area. While the streetcar will sit on the tracks, the wagon will be on an elevated display.

And with the board approving the funding, he said, work on the project can begin.

The Vicksburg Fire Department’s horse-drawn wagon is more than 100 years old and bears the designation “VFD No. 7” for fire station No. 7 on Washington Street, which was built in 1910 and was its original home. The station is still being used and the refurbished wagon is stored there.

Streetcars first arrived in Vicksburg as part of the Vicksburg Electric Street Railway in 1899. Over the years, through name changes and the company changing hands, the network of electric streetcars continued to operate in some capacity through 1939. At the height of its service in the 1920s, there were as many as 22 streetcars operating in Vicksburg over about 12 miles of track.

The streetcar was removed from a waterfront home in the Long Lake area, where it served as a kitchen and screened porch for decades. It was removed with much of its original wood flooring and ceiling still intact and is presently being stored at the former Blackburn Motors building on Washington Street.