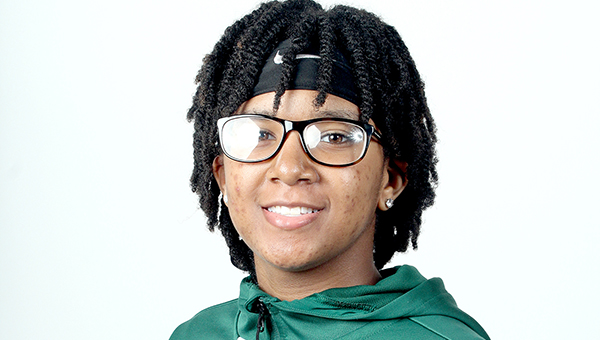 Vicksburg High basketball player Destini Sims had 17 points, 10 rebounds and four assists in a 71-56 victory over Northwest Rankin on Tuesday.

A week off did not do anything to slow the Vicksburg Missy Gators’ roll.

Destini Sims finished with 17 points and 10 rebounds, and three other players scored in double figures as Vicksburg defeated Northwest Rankin 71-56 in a girls’ basketball game on Tuesday.

Vicksburg (6-3) has won six of its last seven games, including the last two by double digits.

Sims spearheaded Tuesday’s effort, as she went 8-for-12 from the field and added four assists to her point total.
Janiah Caples and Ja’Na Colenburg scored 12 points apiece for the Missy gators. Layla Carter came close to a triple-double, finishing with 11 points, 11 rebounds and eight assists.

Vicksburg will play at Natchez on Friday at 6 p.m., and then hosts Warren Central Saturday at noon.

Kealon Bass was Vicksburg’s only player in double figures, with 13 points. Eight of those came in the third quarter. Malik Franklin added eight points and Chris Green hit two 3-pointers in the fourth quarter to finish with six points.

The Gators (4-5) lost for the second time in three games, after winning three of their previous four.

Lawson Selby had 14 points and six rebounds to lead four players in double figures as PCA defeated Deer Creek in its MAIS District 3-3A opener.

PCA is on the road Thursday at Manchester Academy, before returning home for back-to-back games Monday and Tuesday against Greenville Christian and St. Aloysius.