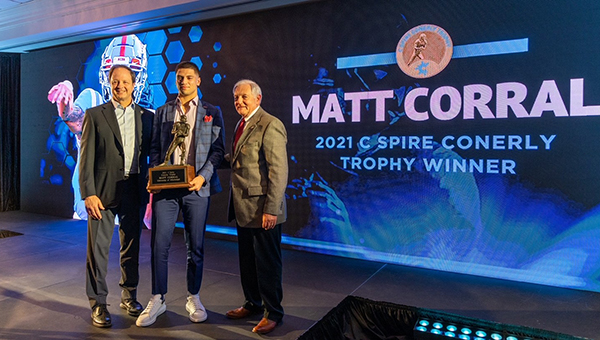 JACKSON — Matt Corral will find out early next week if he has a shot at the Heisman Trophy. He’s already got Mississippi’s version in his hands.

The Ole Miss quarterback on Tuesday won the 2021 C Spire Conerly Trophy, which is given each year to the top college football player in Mississippi.

Corral is the 10th Ole Miss player to win it, and the second in a row after wide receiver Elijah Moore. He’s also the first quarterback to win it since Mississippi State’s Dak Prescott did it in 2014 and 2015.

Corral, a junior, has completed 68 percent of his passes this season for 3,339 yards and 20 touchdowns, with just two interceptions. He also has 597 yards and 11 touchdowns rushing.

Corral is the only player in the FBS this season with more than 3,000 yards passing and 500 yards rushing. He has led the Rebels to a 10-2 record — the first time in school history they’ve won 10 games in the regular season — and a likely New Year’s Six bowl berth.

Corral is also a leading contender for the Heisman Trophy, which is given to the top player in the country. The finalists for that award will be announced early next week, and the award itself will be presented at a ceremony in New York on Dec. 11.