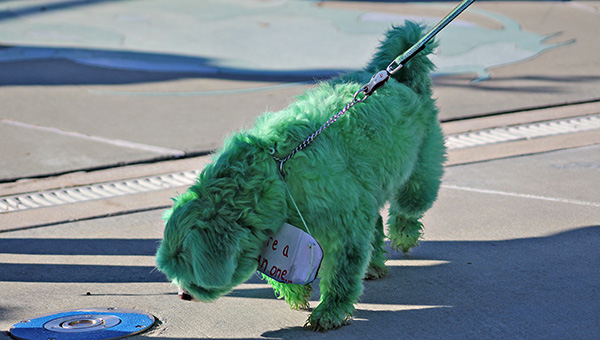 Sherbert, a poodle owned by Jen Roberts, walks in the pet parade at the 2020 Reindeer Run 5K. Sherbert was dyed green by its owner to play as the Grinch in the event’s dog costume contest. This year’s Reindeer Run is scheduled for Saturday at 8 a.m. at Catfish Row Park. (File/The Vicksburg Post)

It’s the most wonderful time of the year, with dogs all a’smelling and people all yelling for runners to prevail.
Humans as well as animals will hit the streets of downtown Vicksburg Saturday morning for the Reindeer Run 5K.

Vicksburg’s final major running event of 2021 features a holiday and animal theme. In addition to the run and race walk, there will be “reindeer games” for children and a pet parade. Dogs are welcome to run with their owners.
The race is scheduled to begin at 8 a.m. at Catfish Row park on Levee Street.

“It kicks off the fun day in Vicksburg, and people love running and walking with their dogs,” race director Debbie Haworth said. “We have a DJ, Santa and Mrs. Claus will be there, we’ll have food from LD’s, and Southern Beverage will provide some adult beverages.”

The Reindeer Run is a fundraiser for Paws Rescue, a local no-kill pet rescue organization. It has raised nearly $33,000 for the organization in its first two years, and Haworth said she hopes this year’s edition will bring in anouther $25,000.

More than 200 people had registered as of Thursday morning, Haworth said. More than 50 sponsors have also signed on.

“The cool thing about this race is that 100 percent of the sponsor money goes to Paws Rescue. We don’t take any of the money to pay for T-shirts or anything like that,” Haworth said. “They (Paws Rescue) operate by donation only. They work with rescues and caravan the animals all over to make sure those dogs have a fur-ever home.”

Online registration closed Thursday, but late registration will be open from 5 to 7 p.m. Friday at LD’s Kitchen next to Catfish Row Park. Those who have already registered can pick up their race packet then.

Raceday registration will be open Saturday from 7:15 to 7:45 a.m. at Catfish Row Park, and the race starts at 8. The registration fee is $35.

The route will head along Levee Street to Washington Street, and then up to City Hall before doubling back. Although there is a bit of an uphill climb, Haworth said it was designed as a more leisurely course for an event that puts fun first and competition second.

“The route is easy,” Haworth said. “Last year we had people strolling their babies and walking their dogs. We’ll leave the uphills for the Chill in the Hills.”