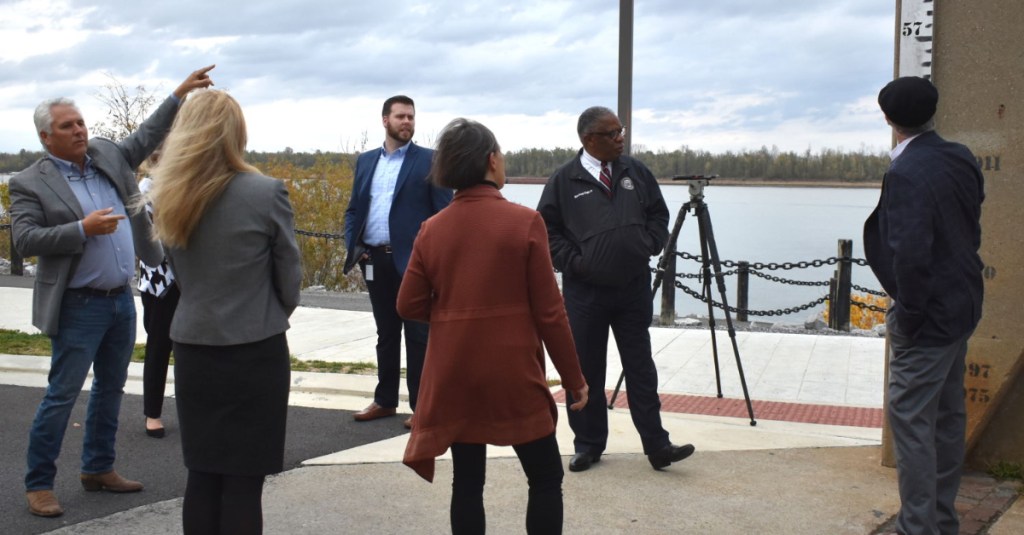 Mayor George Flaggs Jr. (pictured at center, background) looks at a floodwall water marker Wednesday, during a walk around the downtown Paducah, Ky. riverfront. Paducah City Engineer Rick Murphy (at left) and other Paducah officials guided the Vicksburg delegation around the area during the benchmarking visit. (Photo by Kelly Farrell | The Paducah Sun)

The Vicksburg officials who visited Paducah, Ky., gleaned some good ideas from a tour of the city and its waterfront. The challenge is how to take those ideas and adapt them to Vicksburg’s situation.

Paducah was chosen because it was named in a Vicksburg Waterfront Downtown Riverfront Improvements Report as a comparable city to Vicksburg.

Both cities are riverfront communities in the South with similar population sizes and focused on the arts. The Vicksburg delegation came looking for best practices as they prepare to move forward on developing a stronger riverfront presence adjacent to the downtown retail area.

“I thoroughly enjoyed it; it was very informative,” Richardson said.

He said Vicksburg and Paducah are cities of similar size with similar issues and challenges. In talking with Paducah officials, he said, “They had to deal with the same amount of issues we’ve had to deal with.

“They have more horizontal (flat) land on their waterfront than we do,” Richardson said. “Our (waterfront) is a little tighter. We have the floodwall, the railroad, Levee Street, everything was really close; they have more room to work with.”

Like Vicksburg, Richardson said, Paducah has gone through a multi-year process of improving its waterfront area.

“I think they have been working and improving their waterfront for about as long as we have,” he said, but added, “A lot of our moving pieces have been set like the MV Mississippi, we have that; they don’t have something like that. There are some similarities but some big differences.”

Paducah, he said, does not have riverboat companies leasing space on the riverfront for improvement.

Paducah, Richardson said, has 11,000 acres that its floodwall protects. The city’s floodwall has 20 to 30 gates.

“Their floodwall protects their whole downtown area and a lot more area than ours, but they have more flat area than we do,” he said. “Ours, we go straight up the hill. So that’s what we’re looking at, improving our pedestrian and our vehicular circulation right there at the toe of the hill and making it so it’s more usable, more visitor-friendly and safe.

“That’s what we’re doing with the sidewalks, and all that work we’ve done with the railroad and hopefully we look at where we need to do to do our improvements on the dry side of the railroad tracks.”

Richardson said city officials can’t circle a section of Paducah and try to do the same thing here because of Vicksburg’s topography. He said a current project in Paducah is a park on the site of a demolished hotel.

“We’ve done that with the Catfish Row Art Park,” he said. “We just need to improve the pedestrian circulation around the park.”

“I know we have the hills from our riverfront to the retail, but I think if we could figure out a way for ours to connect, maybe using the trolley or something like that to help ours connect, I think that would be wonderful,” she said.

“The trip was really good. Their businesses were great; some of them stayed open until 6 (p.m.) and there were the restaurants,” she said. “I thought that was really good. All the city departments and their Main Street worked well together; I was really impressed with that. Their riverfront impressed me and their boat dock impressed me. They also had some very beautiful signage.”

Hopkins said one difference between Vicksburg and Paducah was Paducah’s Main Street program was that, under the city and its Main Street director is an urban planner.

“If we could get the boat dock they have and connect our waterfront to our retail that would be great,” she said. “We already have a great community and a great downtown, and once we get to that point we’ll be 100 percent.”

“I liked the dock,” he said. “The downtown area was nice like ours as far as having good food and it was a close-knit community like ours; everybody was pleasant. The hospitality was like ours, they took the time to show us exactly what they were doing and some of the ideas that they have we already have here. We’re just looking at enhancing them.”

Reynolds said the city, like Vicksburg, had landmarks outlining the area’s history.

“I liked that because they were talking about their history,” he said. “Overall it wasn’t a wasted trip; the whole time we were there, there was always something to look at or something to do.”

One feature from Paducah Reynolds said he would like to see here is the local stores extending their hours.

“The restaurants are doing good after hours; I would like to see the stores stay open until 7 (p.m.),” he said. “People work from 8 to 5 and when they get out the stores (downtown) are closed. They should try it out with the tourists coming in. I think that will get more tourists downtown and more business.”

Flaggs called Paducah a great model for the city.

“What we’re going to do is start with downtown and the retail and start to connect the downtown in the daytime to the riverboats; we think that’s a great extension,” he said. “We’re going to look at extending the hours and enhancing the downtown area.

“We’re going to develop the riverfront from the river to Washington Street as it relates to an amphitheater, pavilion. We want to tie in with the riverboats that are designing and building their own docking locations.”

Flaggs said he will meet with Main Street officials to discuss the idea of having the downtown stores stay open later to meet the needs of shoppers and tourists.

“We just need to put more family recreation opportunities on the Mississippi River,” he said. “We’re the only river city that I know of that doesn’t have recreational use of the river.”