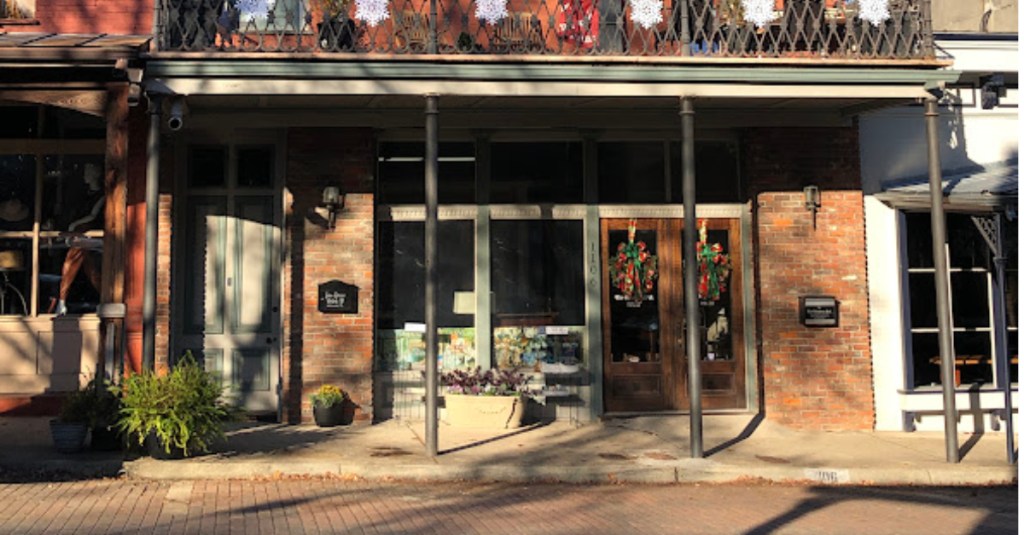 The building at 1106 Washington St. has seen many businesses come through its doors, but is now the home of The Vicksburg Post. (Photo submitted)

Constructed as early as 1869, this two-story commercial building on the west side of Washington Street housed the Imperial Restaurant and Saloon at that time.

An article in the Vicksburg Herald reported that the proprietor John D. Rines had “refitted and refurbished his restaurant with all the modern improvements and is now prepared to receive boarders, with better accommodations than heretofore. His table will be supplied with the best this and the New Orleans market afford, and prepared in a style that cannot be surpassed in the South.”

In 1871, I. Bloomensteil operated his confectionary in the building and in 1872 Cogniasse’s Millinery Store was here.  By 1875, C. C. Reynolds and Co. Druggist was operating out of the building until they moved further south on Washington Street and then by 1886, W.H. Donehoo, a dealer and manufacturer of saddles and harnesses, later to become H.J. Wagner saddles (by 1894), could be found in the building. Wagner went bankrupt in 1894 and the building was then used as the G.A.R. General Merchandise Store. In July 1902, W.E. Mollison, Wesley Crayton, T.G. Ewing and others chartered the Knights of Honor Savings Bank, which would open in the south half of the building.

An article in the Vicksburg American reported that the bank would open on about Dec. 1 and the hours would be 10 a.m. until 2 p.m., except on Saturdays when they would be open from 10 a.m. to 8 p.m. The article continued, “a limited number of checking accounts will be received. Four percent interest will be paid upon sum deposited for three months or longer. The bank is operated as a distinct and separate institution from the Knights of Honor of the World.  The Supreme Lodge has no connection with the bank.  Its shares of stock at $5 per share are for sale to any person desiring to invest.”

Before the bank, which was Black-owned, could get much of a start, the Knights of Honor of the World in Cincinnati, Ohio sent a letter to the editors of the newspapers in Vicksburg stating that it appeared that the bank was affiliated with their organization because that was a part of the charter of incorporation. It is not clear why the national office was not included in the founding of this bank, but shortly after the letter, in January 1903, the bank board met and voted to change the name to Lincoln Savings Bank.

Between 1888 and 1934, 134 banks were founded and organized by African-Americans in the United States. Lincoln Savings was the first of 12 banks to open in Mississippi.

By June of 1910, the bank was in financial trouble because of unsecured loans and a practice of lending in excess of deposits. The bank was suing to recover unpaid loans and they were being sued by depositors who wanted their funds returned with interest due. In October the bank was in the hands of a receiver, W. Thomas Rose, who stated that $40,000 was due the bank. The suits continued until 1914 when American Bank and Trust Company in Vicksburg bought the remaining notes. During the time that the bank operated from the left side of the building, the right side was occupied by M. Cornblatt, a repairer of umbrellas, followed by umbrella repairer, I. Glicksburg in 1907, and H. Meyer, of the same profession in 1909.

Marcus Furniture occupied the entire building beginning about 1911 and remaining until 1921 when the firm moved to the 1200 block. The building was vacant for a number of years until Home Furniture moved in for a few years and then the building was again vacant as late as 1937.

By 1939, Liberty Café operated out of the building and then over the next 80 years, many businesses have moved in and out. The first floor is today the home of the Vicksburg Post and an apartment occupies the second floor.