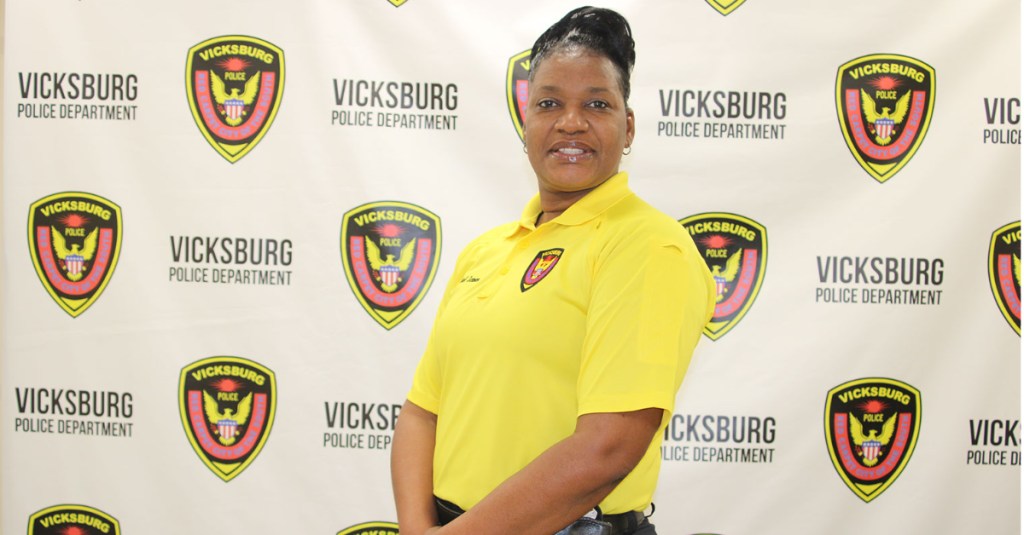 On July 2, Penny Jones made history becoming the first woman to be sworn in as Vicksburg police chief.

And it didn’t take long for her to have an impact on the community, as she instituted several programs to give the police department a greater presence in the neighborhoods.

A 22-year veteran of the department, Jones is a Vicksburg native who initially started out to be a nurse, but was sidetracked when she became pregnant. She later graduated from Alcorn State University with Bachelor’s and Master’s degrees in criminal justice and will receive a Master’s in workforce education in 2022.

But she didn’t put her criminal justice degree to work immediately.

“After my daughter was born, the casinos opened and I was able to get a job at a casino where I worked for 10 years before I actually joined the police force,” she said. “At the time the casinos came, they paid more money than the average job in Vicksburg, so I stayed there for a while. I made a decent salary.”

It took a friend, Roosevelt Bunch, a member of the “Lucky Seven” — the police department’s first black police officers — “who kind of convinced me to take the test,” Jones said.

Bunch, former officers Clyde Harris, Carl Bennett, “and so many others that I knew in the community kind of egged me on and convinced me that it would be a good career, especially for a female in law enforcement. They kind of walked me through,” Jones said. “Some of the old hands around here, the ones who had been around here probably before I was born.”

Besides, she added, “It (law enforcement) runs in my family. My aunt is a retired police officer in Detroit, Mich. Many years ago, my father was in law enforcement. I have another cousin who’s in law enforcement and a slew of relatives who are already in it. I think it’s almost in my blood.”

Joining the police department, Jones said, was probably one of the most exciting things she ever experienced. The police academy “was the toughest thing I experienced besides having a baby.”

“I was very curious,” she said. “Though I was not assigned to specialized divisions, on my days off I would ask the supervisors if it was OK if I could come in and shadow you guys just to see what you are doing because I definitely wanted to see what I wanted to do here at the police department.”

Jones found two areas of interest — narcotics and domestic violence. Domestic violence, she said, held the most interest and still does. Even as chief, Jones said, she works with those cases.

Jones followed Sgt. Beverly Prentiss as the department’s domestic violence officer and worked with Prentiss before taking the position.

“She reared me in the best tactics to fulfill in helping a victim,” Jones said. “I remember she taught me a lot in the position and even when she was working part-time she still helped me work on cases. Even when she retired, we would talk about different things I could do, so many ideas to keep the focus going in domestic violence.”

When she joined the police department in 1999, Jones said she was aware of domestic violence “because I knew of people fighting. I had been exposed to it because I was a victim.”

Helping victims, she said, was a passion before she joined the department.

“Domestic was just me being a victim and me wanting to help because ultimately that was my goal for being a police officer. Our motto is to ‘Serve and Protect.’ I think that was my motto before I ever got here.”

She never stopped working on domestic violence cases, she said, even after her promotion to patrol commander and later as deputy chief for patrol.

She has organized the Peni Center, an education center for victims — she calls them “victors” — of domestic violence to teach them how to get to a better life. The shelter teaches them how to do resumes, learn life skills, manage their money, build their credit report and work on the computer.

The shelter is located in a building on Sky Farm Avenue that was donated to her for a shelter.

“I’m thankful he chose me at the time,” she said. “I had an opportunity to fulfill my educational dreams to work in every division at the police department to get the experience in every division; so it’s almost easy to be in the position because I feel like I’ve already done it.”

Moving mobile headquarters to different neighborhoods of the city was one of Jones’ first projects.

“My goal was to serve and protect,” she said. “In serving and protecting what do you do? You have to come up with creative ideas to keep people safe in the community. The mobile command center is probably one of the most unused tools that we have here in the police department and it can open up the door for so many things. I chose to take it to the neighborhoods because we can’t be there all the time. The police can’t be there all the time, but the mobile command center can be there for the community.”

She decided from the beginning the center’s first stop was the New Main Apartments.

“There were so many issues going on (there) at the time, especially when we started this in July,” Jones said. “I knew that that would be the first place I would want to go because it was almost like they were crying out for help.

“I knew what that mobile command center could do so it was easy to make a choice to go there first.”

The command center, she said, is able to show other areas of the city that while the police can’t always be in a particular neighborhood, they can put officers in the area to respond to calls.

Another program Jones began is Operation Blitz, a program where areas of town are saturated by a team of officers to write citations, serve warrants and make arrests.

The idea, she said, came from a discussion with then-Lt. Jeff Merritt, a New Orleans Saints fan who explained the blitz.

So far, Jones said, Operation Blitz has been able, almost on a daily basis, to get a gun off of a juvenile on the street.

“That’s one less gun out on the street, one less citizen in the community that can get hurt at the hand of a juvenile,” she said.

A program she hopes to operate in the spring is the Citizens on Patrol Academy to give residents an opportunity to observe police officers on the job. She has asked some retired police officers to teach in the program.

Residents, she said, will get an opportunity to see how cases are worked, go to the firing range, and ride in a patrol car to learn how officers determine if someone is driving under the influence.

“It’s just a one-on-one way to see how we work,” Jones said.

She also plans to work on solving some of the department’s cold cases.

“I would like to bring closure to families who have waited so many years to find out what happened to their loved one and to put the person in jail who committed that heinous crime,” Jones said.

She also plans to revive the police department’s streetball program, but to include computer classes and other educational programs and provide better nutrition along with the basketball.

Jones’s term is four years but it could run longer. Whenever her tenure ends she hopes people will review it and say, “I helped the citizens in the community to get to a better place. That she served and protected the way that a chief should have, that I accomplished the goals,” she said.

“I want them to read the definition of a chief and say that was Penny Jones. That was the chief. That they’ll know it was me.”

To view the full “Best of the Best” list, visit vicksburgpost.com/bestof.