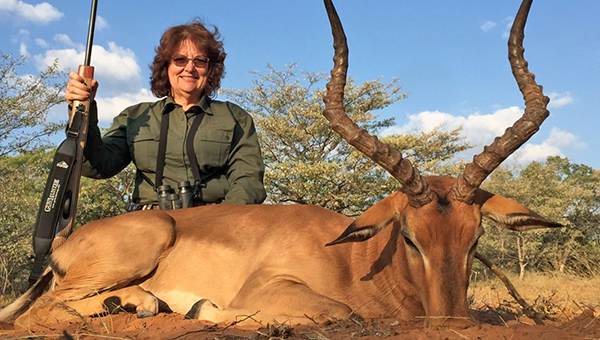 Robyn Lea poses with an impala she hunted on a trip to South Africa. The impala was harvested on a 10,000-acre plot of private property, on a hunt with the landowner. (Submitted to The Vicksburg Post)

Recently, a non-hunter mentioned that she did not think there were many female hunters in this area. I nodded politely but could not stop thinking about her statement, because I know plenty of women who hunt.

Throughout the remainder of the day, that thought became less about how many female hunters there are and more about the women themselves. Who are these women? What do they enjoy about hunting? Do they have obstacles that male hunters do not face? Do they have advantages over men who hunt?

Here is what I learned:

• About 50 percent of the women who responded started hunting as children, mostly with their fathers or brothers. However, one of the women mentioned her mother was the person who taught her to hunt. The remaining 50 percent began hunting as adults and primarily hunted with their husbands or boyfriends.

• These women started hunting for a few different reasons, including spending time with their father or husband; as a family outing; or a normal event in their family and that is what everyone did so they joined in the fun.

Wanda Cook, my hunting buddy, started hunting as an 18-year-old bride because her husband hunted every weekend. She was devastated not to spend more time with her brand new husband, so she picked up a rifle and started going with him. Almost 50 years later, Wanda and Jerry Cook still hunt together.

• I asked these women, “What do you like about hunting?”

Their answers were similar: they love being outdoors, it is peaceful, the quietness and beauty surround them, they are rarely this still and contemplative, they enjoy hunting in the morning and watching the world come alive, they feel close to God, it is pure joy, their lives are stressful and getting in a deer stand offers them complete peace. They love seeing wildlife in its natural habitat.

I received frequent admonishments from my husband when I first started hunting because he thought I was talking too much in the deer stand. Wanda Cook advised me to get in a stand by myself as soon as I was safe to hunt alone. It is better to be in a stand without company.

• As a hunter, I see two disadvantages women have as compared to male hunters. Almost all of the women identified the same two issues — going to the bathroom and hauling the game out of the woods alone. Both of these topics present some challenges for women, however, most of us have managed to overcome these obstacles.

Jan Daigre, a lifelong hunter, explained that her husband, Bubba, gave her a rope and a snatch block.

“You should have seen that,” Jan Daigre said. “There I was looking for a tree with a limb low enough and strong enough to throw the rope over and then use the winch on my side by side to lift the deer into the back of the buggy. Gee, it’s just easier to wait until Bubba Daigre gets home and I send him out to get the deer for me.”

I agree, Jan, it is easier to call my husband, Mark Posey, and let him know there is a deer in the woods waiting on him. A few years ago, he found an easily operated lift to load the deer on my 4-wheeler.

A few problems remain — finding the deer and getting it up out of the lowest gulley on the property. Although I can load the deer myself, rarely can I find it without Mark’s help.

• On the flip side, I asked these women if they believed they had any advantages over male hunters. The majority think women are more patient than their male counterparts and have better eye/hand coordination, allowing for them to be more accurate shooters.

• Regardless of what age these women started hunting, every one of them still hunts. Marian Love, a well-known, long-time hunter and hunting blogger, is in her 80s and still hunts as often as she can. I hope to hunt with her one day very soon!

• Just like male hunters, female hunters use a variety of rifles, shotguns, muzzle loaders, compound bows and crossbows. We all have our favorites for very different reasons.

Although I have experienced some issues with length of pull, most of the women have not. It is an easy fix, but definitely something to consider if you are purchasing your first rifle. Women’s arms tend to be shorter than men’s. Therefore, the length of pull is shorter as well.

Rifles you purchase over-the-counter are, generally, made for men. There are stocks you can purchase with a custom length of pull, or you can take that over-the-counter stock to a gunsmith and have it adjusted.

• I was interested to know what the women would say to non-hunting women and girls about hunting.

Most of the answers were similar: Try it a few times and decide for yourself whether or not it is for you; there is no other experience like this — being in nature, being still and quiet; seeing God’s beauty; knowing the dishes and laundry will still be there when you get home, so go have fun.

Hunting continues to be a male-dominated sport. My husband and I belong to a number of hunting camps. At a few of those, I am the only woman. At others, there is at least one other woman, and sometimes two or three, who are ready to get up early, pull on a whole bunch of warm clothes, grab a rifle and head to the woods — even if our husbands have to come find our deer and haul it in for us.

Robyn Lea is a resident of Vicksburg. She can be reached at robyn.lea.mdjg@statefarm.com