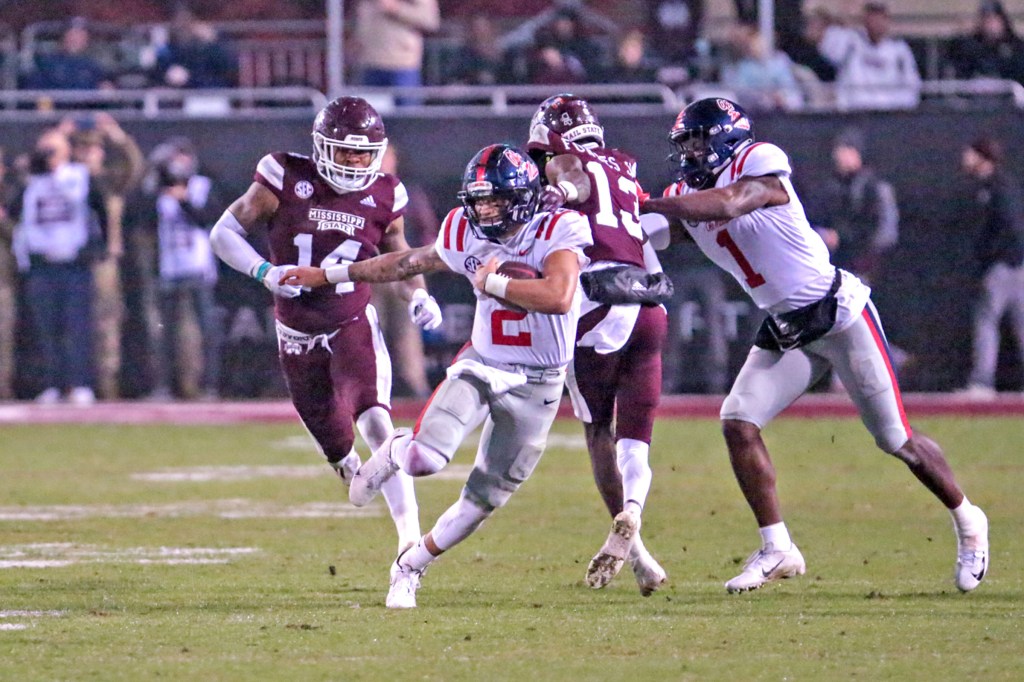 Ole Miss quarterback Matt Corral (2) runs through Mississippi State's defense during the Egg Bowl. Ole Miss will play Baylor in the Sugar Bowl, and Mississippi State will face Texas Tech in the Liberty Bowl, it was announced Sunday. (Walter Frazier/For The Vicksburg Post)

Ole Miss is tasting Sugar, while Mississippi State is enjoying a bit of Liberty after their bowl assignments were announced Sunday.

Ole Miss finished No. 8 in the final College Football Playoff rankings and earned a trip to the Sugar Bowl in New Orleans. The Rebels (10-2) will take on No. 7 Baylor (11-2) in the Superdome on Jan. 1.

“We are taking another big step in our growth toward being a championship program by earning a New Year’s Six berth in the Allstate Sugar Bowl,” Ole Miss head coach Lane Kiffin said in a statement. “I’m excited for our players to compete in one of the most tradition-rich bowls against a premier program in Baylor.”

Ole Miss posted the first 10-win regular season in the program’s history. It earned the Sugar Bowl bid when Southeastern Conference foes Alabama and Georgia both were selected to participate in the College Football Playoff.

The Sugar Bowl was a welcome consolation prize for both Ole Miss and Big 12 champion Baylor.

Baylor is making its fourth appearance in a New Year’s Six bowl since the Playoff era began in 2014. It played in the Sugar Bowl following the 2019 season.

Ole Miss is in the Sugar Bowl for the first time since the 2015 season, and 10th overall. The Rebels are 12-2 in their last 14 bowl appearances.

The only other time Ole Miss and Baylor have faced each other was in the 1975 season opener, which Baylor won 20-10.

“As our fans have showed in the past, Rebel Nation will show up in full force and turn New Orleans into Oxford South,” Ole Miss athletic director Keith Carter said.

Mississippi State head coach Mike Leach will go against one of his former teams — and players — for the first time since coming to Starkville. He was Texas Tech’s head coach from 2000-09. Texas Tech interim head coach Sonny Cumbie played at the school during Leach’s tenure.

This is the first time MSU and Texas Tech have played each other since 1970.

Mississippi State is making its 12th consecutive bowl appearance. It has won three of its previous four Liberty Bowl appearances, including a 44-7 victory over Rice in its last trip there.

Texas Tech is making its first appearance in the Liberty Bowl. This is the program’s first bowl game of any kind since 2017.

LSU will play in a bowl game for the 21st time in 22 years. Its lone absence was in 2020, when it was eligible but opted not to play in a bowl because of impending NCAA sanctions.

The Tigers became bowl-eligible this season with a 27-24 win over Texas A&M in the season finale, which was also the final game for outgoing head coach Ed Orgeron. He will not coach the team in the bowl, as assistant Brad Davis takes the reins before handing them off to newly-hired head coach Brian Kelly.

“Our football team fought hard down the stretch of the regular season to qualify for bowl competition, and we are proud they will be able to extend their season at the Texas Bowl,” LSU Director of Athletics Scott Woodward said.

LSU will appear in the Texas Bowl for the second time. It defeated beat Texas Tech, 56-27, in its other appearance in 2015.

This will be just the second meeting between LSU and Kansas State. LSU beat the Wildcats, 21-0, in the second game of the 1980 season in Baton Rouge.