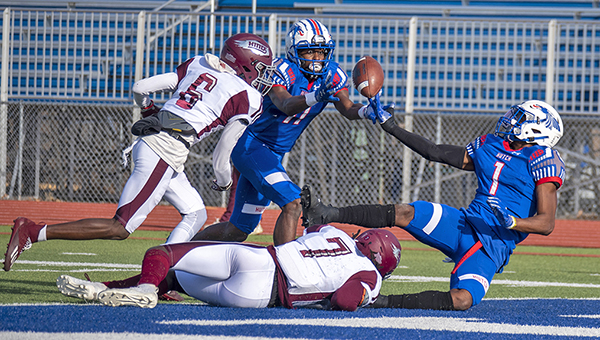 Malik Benson (11) eyes a Hail Mary pass originally tipped by Cortez Braham (1) and catches a 56-yard touchdown on the final play of the first half in No. 5 Hutchinson's 66-34 Salt City Bowl victory over No. 8 Hinds on Saturday. (Andrew Carpenter/Hutchinson CC Sports Information) 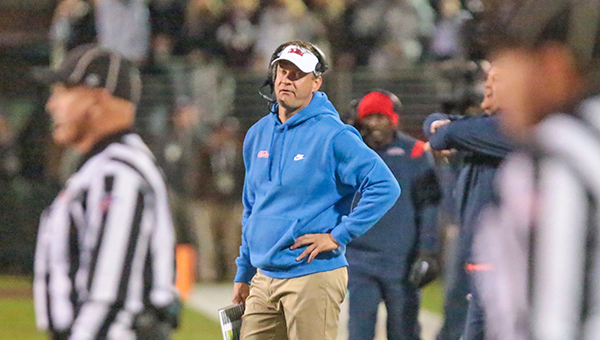 Ole Miss head coach Lane Kiffin watches from the sideline during the Rebels' Egg Bowl victory against Mississippi State. Kiffin and Ole Miss agreed to a new contract over the weekend that will reportedly pay him $7.5 million per season. (Walter Frazier/For The Vicksburg Post)

No. 8 Hinds (8-4) scored 21 points in the first quarter, but still trailed 38-28 at halftime. It only managed one touchdown in the second half, an 8-yard pass from Ruben Lee to Kaleb Mosley late in the fourth quarter.

Former Vicksburg High star Tyrese Wolfe had three tackles and one forced fumble for Hinds, which has not won a bowl game since 2000.

Northwest Mississippi and NMMI combined for 1,280 yards. NMMI’s Anthony Grant rushed for 398 yards and five touchdowns, with four of his TDs covering more than 30 yards.

NMMI (11-1) advanced to face top-ranked Iowa Western (10-0) in the NJCAA national championship game Dec. 17 in Little Rock, Arkansas. The game will kick off at 7 p.m. and will be broadcast on CBS Sports Network.

Iowa Western defeated Snow (Utah) 30-29 in overtime in the other national semifinal on Saturday.

Other than the 2021 spring season in which the MACCC did not participate, this will be the first time since 2016 ­— and only the third time since 2011 —that a Mississippi team will not win the NJCAA national championship.

2
The Mid-South Association of Independent Schools put a bow on its football season on Friday with its two football all-star games.

Tyler Washington — and Tallulah Academy running back Paul Michael Machen were all members of the winning team.
Washington finished with 55 rushing yards on nine carries, and scored a touchdown on a 5-yard run.

3
Amidst all of the chaos caused by coaching changes across college football this season, Ole Miss managed to hang on to its guy.

Ole Miss announced Saturday that it has agreed to a new contract with head coach Lane Kiffin after the Rebels finished 10-2 and earned a berth in the Sugar Bowl. They’ll face Big 12 champion Baylor on Jan. 1 in the Superdome in New Orleans.

The university did not release any details of Kiffin’s new contract, but ESPN reported it will average about $7.5 million per season. Under state law, contracts for public employees are limited to four years.

When Kiffin first signed with Ole Miss, he was set to make $3.9 million in 2020 and receive a salary increase of $100,000 for each season he remained with the school. He signed a one-year extension before this season that raised his annual salary to $4.5 million, plus performance bonuses.

Kiffin’s new contract would place him among the top 10 highest-paid coaches in college football.
The Rebels have led the Southeastern Conference in total offense in each of Kiffin’s first two seasons, and quarterback

Matt Corral emerged as a Heisman Trophy candidate this year.

“We are committed to winning championships at Ole Miss, and Coach Kiffin is the person to lead us to those heights,” Ole Miss Vice Chancellor for Intercollegiate Athletics Keith Carter said.

Minshew stepped in at quarterback for the injured Jalen Hurts and completed 20 of 25 passes for 242 yards and two touchdowns as he led the Philadelphia Eagles to a 33-18 victory over the New York Jets on Sunday.

Another Mississippian, Yazoo City’s Kenneth Gainwell, had 87 total yards and a rushing touchdown for the Eagles. His 18-yard TD run in the second quarter put the Eagles ahead 21-18, and they never trailed again.

Philadelphia improved to 12-0 all-time against the Jets, continuing a streak that started in December 1973. It’s the most wins without a loss in any NFL series, and one of only three current NFL series in which one team is undefeated against another.

The Eagles and Minnesota Vikings are both 5-0 against the Houston Texans, although the Texans did not join the NFL until 2002.

Under the NFL’s rotation for non-conference opponents, the Eagles will next play the Texans in 2022 and the Jets in 2023.