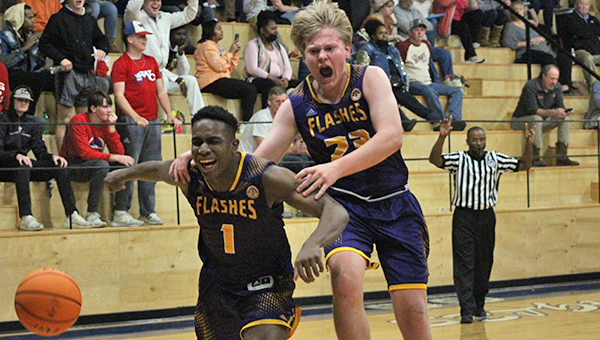 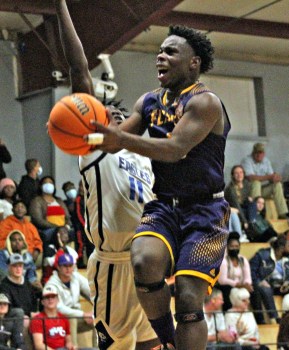 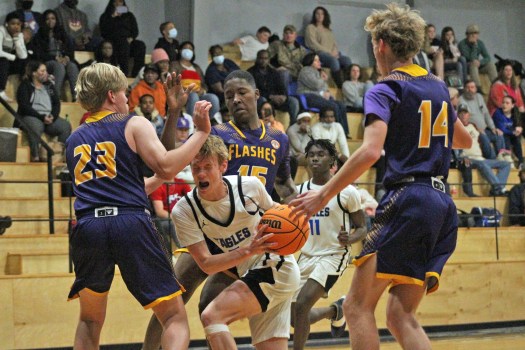 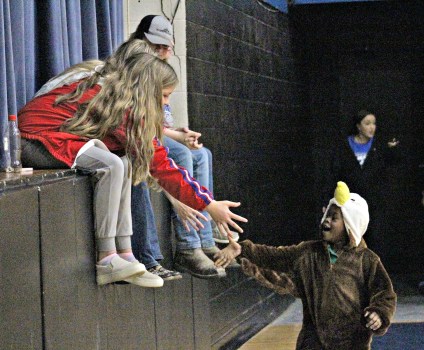 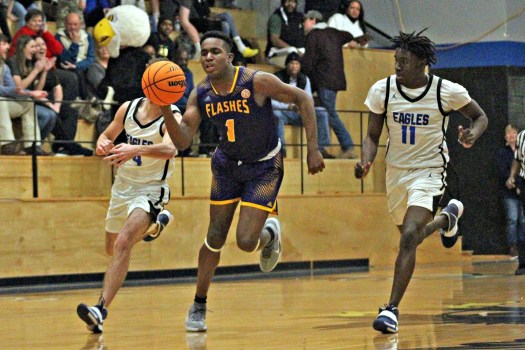 The junior guard hit a game-tying 3-pointer and then a go-ahead layup late in overtime, and finished with 20 points to lead St. Al to a 64-61 victory over its crosstown rival.

Gray’s totals came despite playing with a broken finger on his left hand, suffered the night before against Greenville-St. Joe. It kept him out of the starting lineup, even though he played most of the game.

“It was amazing to see our teammates come together and the way we played together,” Gray said. “It was enough to make a grown man cry. Everybody was scoring, everybody hit big shots, we’re playing defense, and I’m glad we got the win.”

Lazaveon Sylvester led St. Al with 22 points and 12 rebounds, while Matthew Pitre grabbed eight rebounds and Will Keen had seven.

The crosstown rivals’ second meeting in eight days turned into an instant classic, with fans from both schools trading chants and fight songs as often as their players swapped baskets.

St. Al erased a six-point deficit in the final 90 seconds of regulation — Sylvester tied it at 53 on a rebound basket with 31 seconds left — and the game went to overtime after Porter’s Chapel missed a shot with time winding down.

The Eagles also went a miserable 7-for-22 from the free throw line in the game. They only made one of four during St. Al’s run at the end of regulation..

“We didn’t shoot free throws well. At halftime I think we were 2-for-9 or something like that. We had some front-end one-and-ones at the end, too, that would have put it down,” PCA coach Walter Hallberg said.

Gray hit a number of big shots throughout the game, but his biggest moments were saved for the last minute or so. After Taylor hit a shot to give PCA a 60-57 lead, Gray pulled up in transition and hit an open 3-pointer to tie it with 1:05 left in overtime.

On the next trip up the floor, he came up with a steal and raced up the court for the go-ahead layup.

“It’s like a dream come true,” Gray said of seeing the open court in front of him after his steal. “A thing like that, it’s really like the scariest moment because you never know if you’re going to make it or miss it. It’s all about being under control.”

In the final 60 seconds, the Flashes were in total control. After Sylvester missed two free throws with 20 seconds left, Pitre grabbed the offensive rebound. He was fouled and missed the front end of a one-and-one attempt, but the Flashes grabbed the rebound again. Sylvester eventually made a basket off of a miss by Gray for a 64-61 lead with 10.1 seconds to go.

PCA had one last chance to tie it, but Williams missed a long jumper — his feet were just inside the 3-point arc — and St. Al grabbed the rebound as time expired.

“It was exciting. You want to be a part of games like this, for the simple fact that you get to see what your kids are made of. I’m super proud of them, their resilience and what they showed us. It was awesome,” St. Al coach Anthony Lumpkin said. “This is our first close game that we’ve won. We like the blowouts, but at the same time we need to be put in positions where we know what we need to do to win games. We were put in a position where we had to figure it out, and we did.”

Despite being on the wrong end of a hard-fought game, Hallberg was far from discouraged. PCA has won two of its first three district games, and nearly beat a solid St. Al team after losing by 14 to them a week earlier.

“We had the last shot in regulation and we had three chances to get a rebound down there and score down one and we just didn’t do it,” Hallberg said. “It’s a tough loss. But it’s the same thing as when we played them last week. We have district games from here on out, and if we play that hard we won’t lose another district game.”