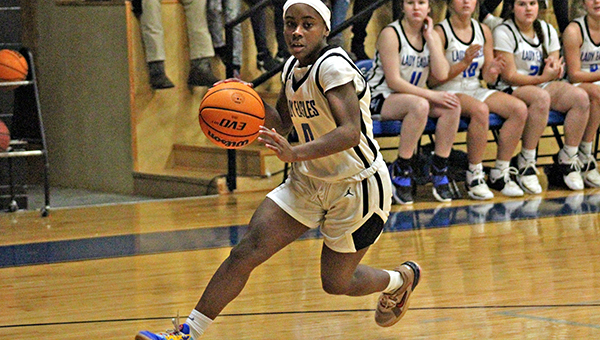 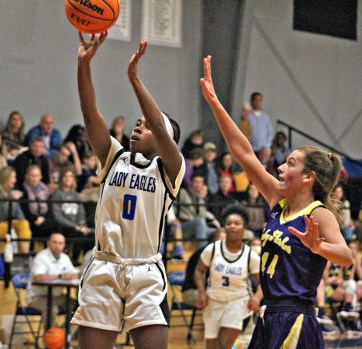 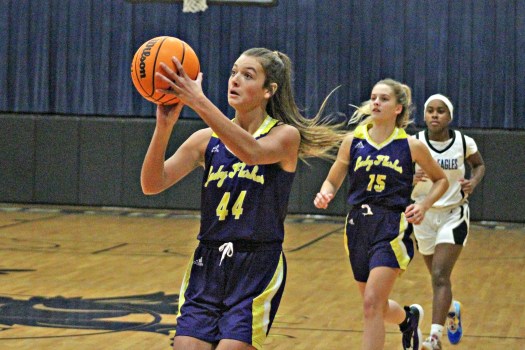 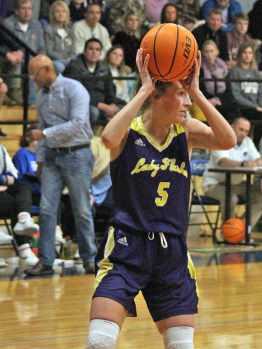 A bunch of small victories added up to one big one for Porter’s Chapel Academy.

The Lady Eagles outscored St. Aloysius by a few points in each of the first three quarters to build a 20-point lead, then cruised home in the fourth to a 58-38 victory in a girls’ basketball game on Tuesday.

“It’s just a game where you give everybody a few minutes. It’s a fun game,” PCA coach Casey Fisher said. “When we got a big lead we decided to let some people play and try some different combinations, and just work on what we need to work on.”

PCA led 18-10 at the end of the first quarter and then took a double-digit lead it never relinquished when Sims hit a pair of 3-pointers in the first 90 seconds of the second.

Sims had three 3-pointers in the second quarter, and five in the game. Smith also drained two 3-pointers.

“We’ve got some girls that are just strictly shooters. I just tell them to shoot the basketball. Have fun and play basketball. If they think they can make it, shoot it,” Fisher said.

PCA outscored St. Al 14-7 in the second quarter and 17-9 in the third. It was enough to make the score one-sided even though the game itself felt fairly competitive. The 58-38 final score was also nearly identical to the one PCA posted in beating St. Al 56-36 eight days earlier.

“If we’d have pressed the issue we probably could have won by more. But we wanted to work on our slow-down game,” Fisher said. “In the fourth quarter we were going to work on our middle screens and run time off the clock. We had enough points to win the game. I need to teach them how to close out a ballgame.”

St. Al (3-9) split a pair of back-to-back games after routing Greenville-St. Joseph 59-10 on Monday night. Despite the setback, coach Savannah Buck said she was encouraged by the team’s overall progress to this point in the season.

Maddy McSherry and McKenzie Cole finished with 10 points apiece against PCA, and Falyn Lusby scored nine. The Lady Flashes will travel to Madison-St. Joseph on Friday for their MAIS District 3-5A opener.

“We have exactly what we need going into Friday. It’s our first district game, so it’s just a good practice before Friday,” Buck said. “I think we’re going in the right direction. Even tonight with a loss, I still think we’re going to be fine. We’re learning each other and making teamwork work.”