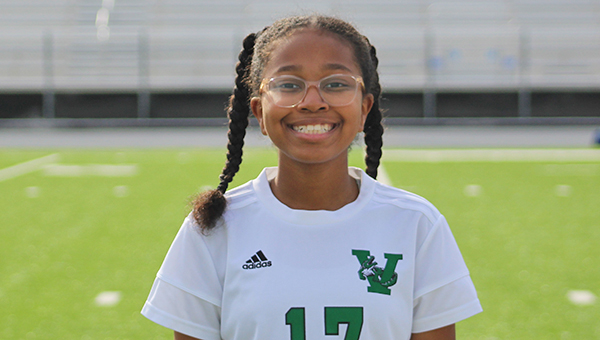 Vicksburg High soccer player Midori Allen scored two goals and assisted on another in a 7-0 win over Forest Hill on Tuesday.

Allen scored both of her goals in the first half, and then assisted on one of Murrell’s two second-half goals.

Amari Johnson also had a goal and two assists for the Missy Gators, while Abigayl Haigh and seventh-grader Tamiyah Davis netted one each. Erin Smith also had an assist.

Haigh’s goal was the first of the midfielder’s high school career.

In the boys’ half of the doubleheader at Memorial Stadium, Forest Hill defeated Vicksburg 4-2. Willie Moore and Cameron Nailor had Vicksburg’s goals, and Keegan Blount had one assist.

Vicksburg will next play on Dec. 14, when it hosts Raymond in a girls-boys doubleheader beginning at 5:30 p.m.

Anaya Holt made six saves for Warren Central. Steed scored two minutes into the second 10-minute overtime period off an assist from Jordan Polk, and then had an unassisted goal in the 18th minute of overtime.

The Lady Vikes (6-4, 1-1 MHSAA Region 5-6A) outshot Terry 23-14, had 16 shots on goal, and bounced back after losing their region opener last week against Pearl. Both of their region games have been decided in overtime.