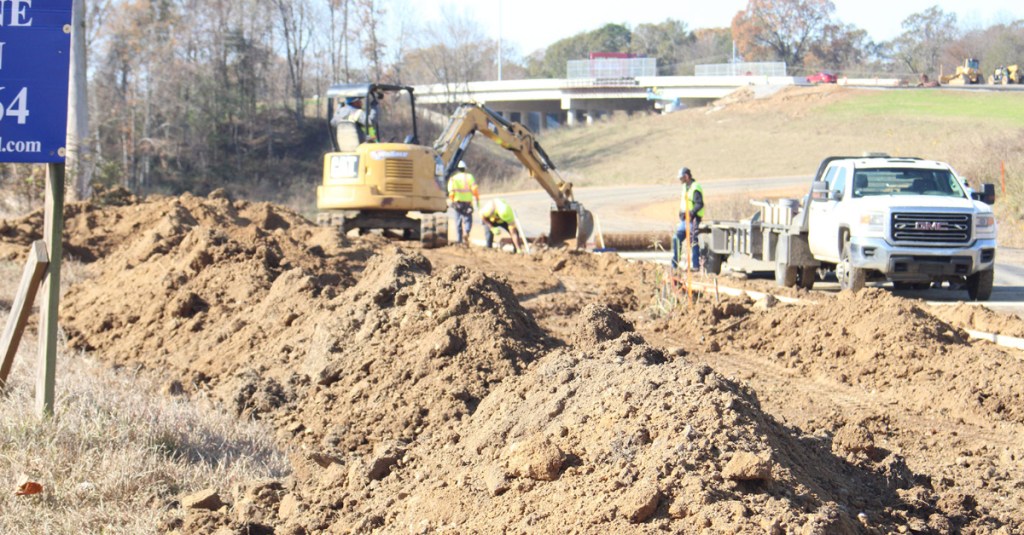 Construction workers dig along the side of the western section of South Frontage Road as the complete overpass crossing the Kansas City Southern Railroad tracks and linking the east and west sides of South Frontage Road rises in the background. The extension is projected to be open to traffic in the spring of 2022. John Surratt

The South Frontage Road extension is on pace to be open to traffic by spring of 2022, according to Mississippi Department of Transportation officials.

“I spoke with our new construction engineer Michael Hogan and he told me the realignment of the existing frontage road is complete and that road can open up as soon as the guardrails and the permanent signs and the permanent striping is in place,” MDOT spokesman Mike Flood said.

“It’s all dependent on the weather, but it’s looking like spring of next year,” he said. “Everything’s moving along.”

The completion of the extension will signal the start of another MDOT project to repair and improve the five bridges on Interstate 20 in Vicksburg. The project is expected to be completed in spring 2023.

In 2007, a Federal Highway Administration study on the project issued a “finding of no significant impact,” clearing the way for the project. Four years later, the Mississippi Department of Transportation bought five properties along the road to secure rights of way for the project, and in April 2015, the Legislature approved $4 million in its fiscal 2015 highway budget to begin planning the South Frontage Road expansion.

The Vicksburg Board of Mayor and Aldermen in April 2018 awarded a $1.576 million bid to relocate the utility lines along South Frontage Road to Hemphill Construction of Florence. The project was completed in June 2018.

The Mississippi Transportation Commission in September 2018 awarded the project to T.L. Wallace Construction of Columbia, which submitted the low bid of $17.33 million for the project. The bid was more than $450,000 under the project’s estimate of $17.80 million.