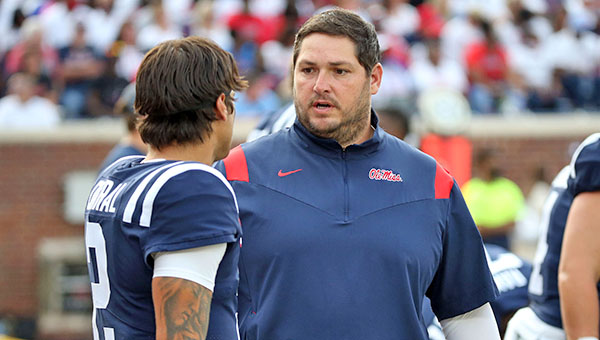 No. 14 Oklahoma made the announcement a few days after Venables replaced Lincoln Riley.

He was a semifinalist in 2020 for the Broyles Award, which is presented to the nation’s top assistant coach.
Lebby was on staff at Baylor from 2008 to 2016. He coached running backs from 2012 to 2016 and was the passing game coordinator and offensive recruiting coordinator for the 2015 and ’16 seasons.

Lebby was hired at Ole Miss in 2020, when Lane Kiffin became the head coach. The Rebels averaged 555.5 yards per game to lead the Southeastern Conference and rank third nationally. Ole Miss also broke the SEC record for total offense in conference games (562.4 yards per game).

This season, Ole Miss again led the SEC and ranked fourth in the country with 506.7 yards per game. It ranked in the top 20 nationally in scoring, at 35.9 points per game.

Lebby has reportedly been recruiting for Oklahoma this week, and his status for either their bowl game or with Ole Miss for its bowl game is unclear.

Oklahoma plays Oregon in the Alamo Bowl on Dec. 29. Ole Miss faces Baylor in the Sugar Bowl on Jan. 1.

“We’re thrilled to welcome to our staff maybe the hottest offensive coordinator in college football,” Venables said in a statement. “The more thoroughly we scouted Jeff, the more we became convinced that he has the character and ability we need and want at OU.”

Roof is a former head coach at Duke who won a national championship as defensive coordinator at Auburn in 2010. He was a defensive analyst at Clemson this season after a number of stops around the country.

“Ted is one of the most experienced coordinators and one of the best teachers in all of college football, and he’s done it in some of the premier conferences in the sport — the SEC, Big Ten and ACC,” Venables said.

Interim head coach Bob Stoops will coach the Sooners against No. 15 Oregon in the Alamo Bowl on Dec. 29.