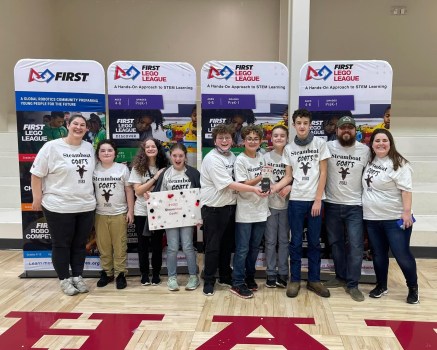 Members of the AOI's Steamboat Goats robotics team pose for a picture at the First Lego League regional qualifier. The team won the Champions Award and will advance to the State competition. 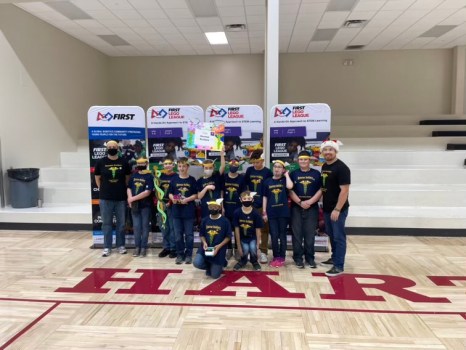 Members of the Bowmar Builders robotics team pose for a picture at the First Lego League regional qualifier. The team won the Robot Design Award and the Robot Performance Award and will advance to the State competition. 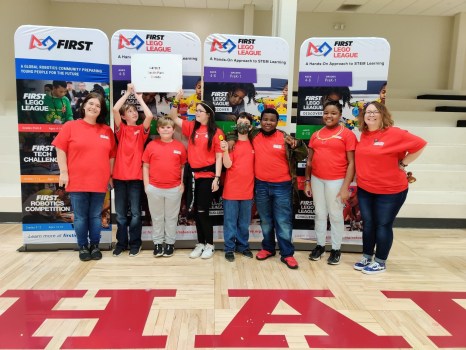 Members of the Southpark Droids robotics team pose for a picture at the First Lego League regional qualifier. The event was held Dec. 4 in Flowood.

This past weekend three schools in the Vicksburg Warren County School District competed in the regional qualifier competition for First Lego League in Flowood.

The Academy of Innovation’s Steamboat Goats, the Bowmar Builders and the South Park Droids were three of the 14 teams that competed.

The Academy of Innovation’s Steamboat Goats walked away with the Champions award, which will afford them the opportunity to compete in the state competition in February.

The Bowmar Builders, who won the Robot Design Award and the Robot Performance Award also qualified for the state competition.

And while the South Park Droids did not qualify for the state competition, coach Kimberly Reeves said her team just enjoyed participating in the regional competition.

“The kids had a blast. The competition was so fun. There was dancing and cheering,” Reeves said.

The robotics team at Southpark spent more than 20 hours constructing their project, Reeves said, which was a drone that would deliver packages and scan for the customer it was delivering to.

“They designed it to use solar and battery power,” she said. “Their reasoning was that it would produce fewer emissions than trucks and cars. It would also use less manpower because it would be unmanned.”

Coaching the Bowmar Builders were Jim Lewis and Aaron Byrd.

Lewis said his team built, designed, and programmed their robot, which garnered the highest score in the Robot games.

“The robot is built from Lego parts and has a unit that connects to the computer, and so you program the unit to have different things it can do during the competition,” Lewis said, adding building the robot requires computer work from the students while also putting the Lego parts together.

Lewis said the team was excited when they learned they would be eligible for the state competition.

“It was really exciting, and we started making a lot of noise. I don’t even remember hearing the other teams announced because we were so excited to hear our team announced,” Lewis said.

Bratu, who coached the team alongside Rebecca Hughes and Mark Burgos, said their team was ecstatic when they heard their name called as the winner of the Champions Award.

“They were so excited to hear their name called. I know there was one team member that was so excited she was crying,” Bratu said.