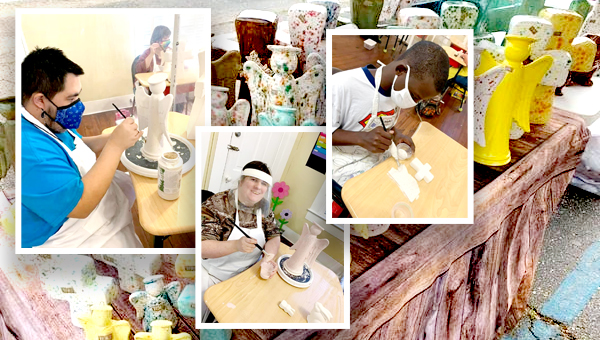 With more visibility, space and activities offered, Jacob’s Ladder’s choice to move to the Purks-Golding Family YMCA has been positive for the program, according to its leadership.

It has also been beneficial to the YMCA. Students help make coffee and set up tables and chairs for events offered by the Y, Jacob’s Ladder director Rebecca Busby said.

Jacob’s Ladder, which is a 501c(3) program that services adults in the community with special needs, was started in 2001 and was previously located in a house on Harrison Street.

But in September, the school moved to the YMCA because more space was needed for the program.

“For the last few years, we have been searching for a new location as we were outgrowing the house on Harrison Street,” Busby said.

During the hunt, she said, she had been in conversation with YMCA executive director Philip Doiron about the notion of “co-locating” to the Y if they were to sell the Harrison Street house before finding a larger space.

The conversations eventually led to Doiron approaching Busby about a more permanent solution.

“He came to the school with the idea of moving into the new addition at the Purks-Golding location,” Busby said.

And with Jacob’s Ladder’s hours aligning with the YMCA’s after-school programs, as Jacob’s Ladder students would leave the facility before the after-school children arrived, “It felt like a perfect fit for both parties,” Busby said.

After further consideration of the option, a formal one-year agreement was developed.

And while the Harrison Street house had been wonderful for the students and is a space that will always hold special memories, Busby said, the Y has offered various advantages.

“The staff and leadership at the YMCA have been extremely accommodating and our students are more socially engaged and active than ever before,” Busby said.

The Y has also allowed for increased activities during the day, more exposure to the community and most importantly, social interaction with members and staff, she said.

“Ultimately, this increased engagement is beneficial to our students and the community as a whole,” Busby said.

Although renting from the YMCA, Busby said, Jacob’s Ladder is not funded by the organization and the two remain separate entities.

Jacob’s Ladder continues to rely on donations and proceeds from their ceramic sales.