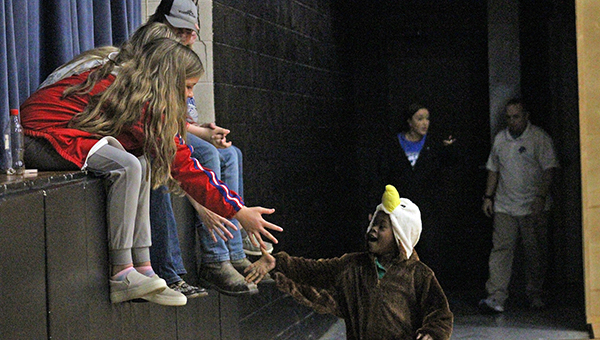 On one side of the gym, St. Aloysius fans sang their school’s fight song. On the other side, Porter’s Chapel Academy fans answered back with theirs. In between, the basketball players on the court fed off the energy and waved their arms to encourage their supporters for more.

When they ran out of material, the fans borrowed some. Late in the game, St. Al’s crowd started a Tomahawk Chop chant that had no relation to anything in school lore and appeared to confuse their counterparts on the other side.

A couple of days earlier, at Vicksburg High School, the scene was much the same. A Warren Central cheer was answered with “V-I-C … KSB .. U-R-G … VICKSBURG, VICKSBURG!” as their respective teams battled it out on the court in a boys’ game that wasn’t decided until the very last second.

If you were a fan of sports at all, it was enough to bring a smile to your face and a happy tear to your eye. The passion, the energy, the competitiveness, all of it was everything good that we love about the games we play.

It also kicked the high school basketball season into full gear with what could hopefully become a new local tradition — rivalry week.

For years, Warren Central and Vicksburg had played on the first or second Saturdays of December and January, or January and February. The second meeting often coincided with the start of region play and was a bit of a distraction now that the teams are no longer in the same classification, so this year they changed the date to mid-November.

The two PCA vs. St. Al games came eight days apart, with the second Vicksburg-Warren Central game sandwiched in between. What was really just a scheduling coincidence, however, provided a fantastic week of local sports.

Last Saturday, a packed house filled Vicksburg’s renovated gym for one rivalry doubleheader. The Tuesday after, fans at St. Al and PCA did the same at PCA. Both girls’ games were blowouts, but the boys’ games were thrillers. Warren Central defeated Vicksburg 48-45, and St. Al beat PCA 64-61 in overtime.

In both instances, the gym was loud and rowdy, in a positive way.

“I told them in the locker room, this felt like when I was here in the early 90s,” said Walter Hallberg, now PCA’s boys coach and an alum of the school. “It was packed like that every night, people were into it every game, and I told them if they keep playing hard people will keep coming back to watch. That was the best game I’ve been involved with since I’ve been here for a year and a half.”

The two rivalry series are finished for this season, and all four local teams are about to go their separate ways. They have a handful of games left before the holiday break, then dive into their conference schedules after that.
There will certainly be big games ahead. Maybe even a few rivalry games. It’ll be hard to top what we saw during that recent eight-day stretch, however.

So, perhaps the powers that be can make sure it becomes a permanent part of the schedule. It won’t always be possible to pull off. Heck, we more or less stumbled into in this case. But playing the two rivalry series in late November or early December, just after Thanksgiving, is the perfect way to put football season in the rearview mirror and announce the true start of basketball season.