Volunteer of the Week: Carroll wears many hats in volunteerism 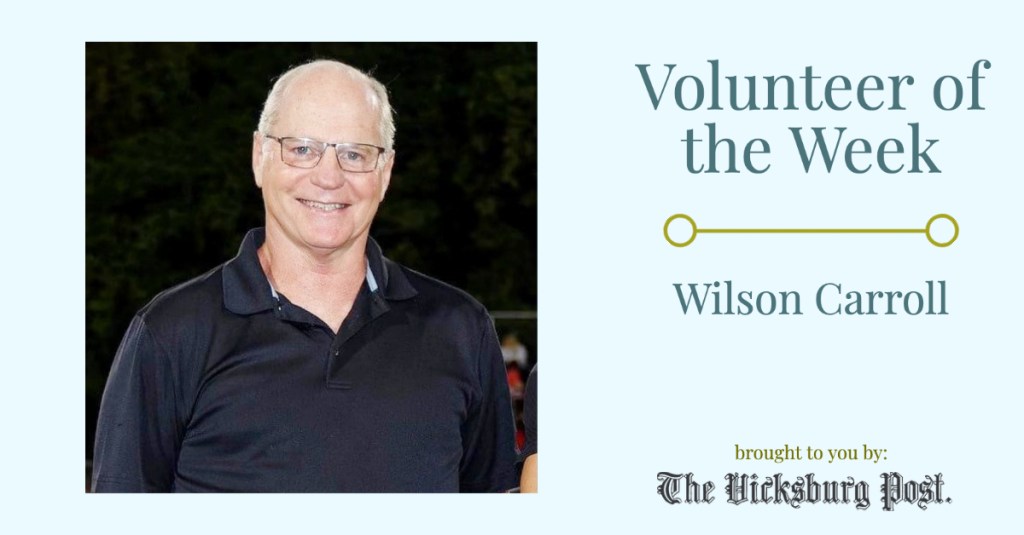 This week’s Vicksburg Post Volunteer of the Week is Wilson Carroll.

Carroll is an attorney in private practice who serves on the Vestry at Church of the Holy Trinity and is also President of the Fostoria Neighborhood Association. He also volunteers with the Cannonballs through the Purks-Golding YMCA.

He is married to Lee Darden Carroll, with three children and one stepson. He grew up in Greenwood, Miss., and lived in Jackson for 30 years before moving to Vicksburg four years ago.

How long have you been volunteering?

I spent nearly a dozen years as a scoutmaster in Jackson and started the Fondren Neighborhood Association back in the early ‘90s. During that time the YMCA operated the Briarwood Pool, which was a small neighborhood facility near Fondren. Due to financial constraints, the Y decided to close the pool, and I spearheaded the effort to keep it open. We had over 70 families join the first year and sponsored a swim team for beginners called the Briarwood Dolphins. We had over 100 kids and they competed against other local clubs in the Jackson Swim Association. The kids learned to swim and, most importantly, everyone had a blast!

After moving to Vicksburg I realized we needed to do something similar here. There are so many kids who want to swim in the summer without committing to a year-round program, and the YMCA has two really excellent pools, one indoor (Purks) and one outdoor (Wilkinson-Ver Beck). Also, I had volunteered to coach the St. Al swim team and needed a developmental program for younger swimmers. I approached Phillip Dworin with my idea and he was immediately enthusiastic about the idea. That’s how the Cannonballs began!

What is your favorite memory while volunteering?

Anytime you work with kids, you end up with great memories. Swimming can be a scary sport at first, but with patience, anybody can learn to do it. There’s just nothing better than watching a novice kid swim the length of the pool for the first time using good technique without hanging on the ropes or touching the bottom. It’s a small victory, but to them, it means the world!

What are your activities and what do they involve?

I love being a dad and stepdad, and I’m so lucky to have found Lee Darden while we were both volunteering at Boy Scout Camp (she was there with her son Logan and I was there with Spencer). Also thanks to Lee, I’ve gotten involved at Holy Trinity and Fostoria. All of that plus the practice of law makes for a full life!

What would you tell someone who is thinking about volunteering?

Don’t be shy! We all have unique gifts and talents which the world needs. Also, I like the idea of “paying it forward.” I can swim today because when I was a kid a bunch of adults in Greenwood spent a ton of time and energy volunteering to run a summer program. Most of them couldn’t swim a lick but they were good organizers and found coaches for us. Now that I’m an old-timer I can really appreciate the sacrifices they made for us kids back then, and I almost feel duty-bound to continue the tradition.

What have you learned from volunteering with this organization?

The Vicksburg Y is just a fantastic organization, and we are so lucky to have someone like Philip Doiron in charge. He’s friendly, funny and energetic. He’s never said no to a singly crazy idea I’ve floated. The Cannonballs wouldn’t exist without him.