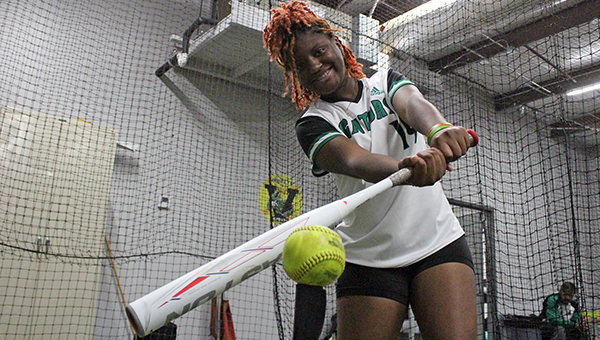 Throughout her high school softball career, Kellisia Walker has gotten a little bit better every year. Heading into her senior season, she’s finally cemented her status as one of the best.

Walker, Vicksburg High’s senior right fielder, signed with Meridian Community College in November. It was a welcome reward for years of hard work and improvement, and a chance to continue on with a game she loves.

“My ninth-grade, going into 10th-grade year, I was just starting to play varsity and getting the hang of it. At the end of my 10th-grade year I fully showed my potential and knew I could play at a higher level,” Walker said.

Walker is the first Vicksburg High player since 2017 to sign with a junior college or four-year school. She has been a starter on either the fast-pitch or slow-pitch team since seventh grade, and moved into the fast-pitch starting lineup as a freshman.

“Last year was probably her best year. She kind of fell in love with the game again, and it showed in what she did for us,” Vicksburg coach Brian Ellis said. “When we got down to the playoffs she was a tough out. She’s a perfect example of, if you stay with it and work on it, what can happen.”

Walker isn’t done yet, either. Ellis said she’s emerged as a team leader for a Missy Gators squad with aspirations on making a deep run in the MHSAA Class 5A playoffs. They reached the second round last season.

“If I were a betting man, I’d say this year is going to be her best year. She’s going to raise her batting average quite a bit, and she’s going to hit some home runs,” Ellis said. “We told her in the beginning of summer that she’s the leader this year, and she’s been one of our best senior leaders in several years now. We’re very proud of her.”

And then, after that, Walker will head to Meridian to begin her college career in both softball and the classroom. She has a 3.2 GPA to along with her solid batting average, and wants to go into nursing.

“I wanted to see how college is before I go into nursing school, so I can play ball and take nursing courses at Meridian,” Walker said. “Hopefully I’ll be able to play in D-I.”