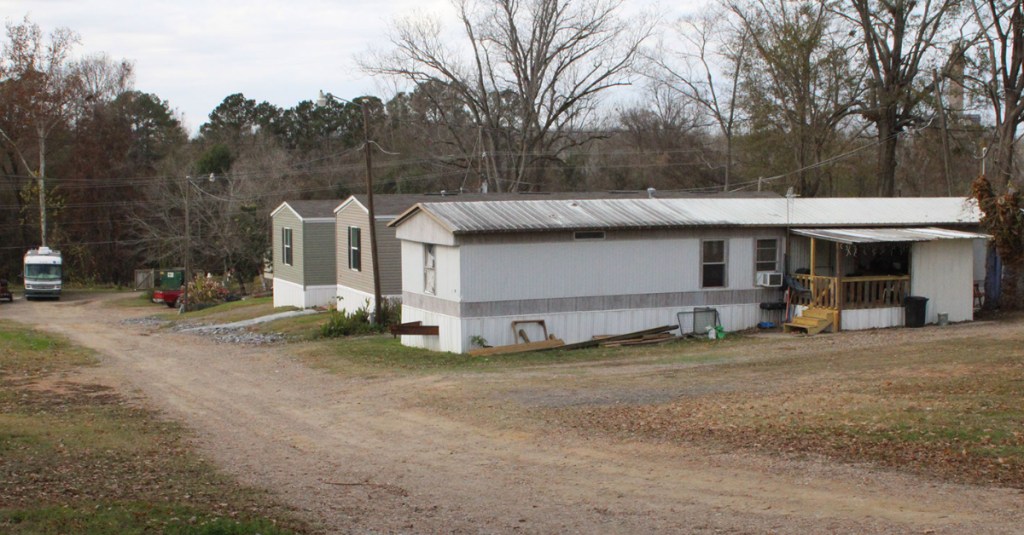 Two new mobile homes sit on the west side of an older structure at the former McDonald Trailer Park. The new homes are part of a plan by the Mississippi Center for Police and Sheriffs to transform the former trailer park into a veterans village to serve veterans and the homeless. (Photo by John Surratt | The Vicksburg Post)

An old mobile home park on U.S. 61 South is undergoing a change that will transform it into a development that will give homeless veterans and other homeless people a shot at a fresh start.

Steve Pickett, executive director the of Mississippi Center for Police and Sheriffs in Raymond, said the organization plans to build 12 tiny houses at the former site of the McDonald Trailer Park off U.S. 61 South, immediately South of the Tomato Place.

He said the nonprofit organization in January will receive a $764,000 Mississippi Home Corporation grant for the project, which will help provide short-term housing for veterans and homeless people to give them the opportunity to find work and afford a home of their own.

“This is an affordable housing program for emergency and transitional living,” Pickett said. “We’re trying to get it (the site) cleaned up to make a veterans community and we’ll be serving veterans and other homeless folks in need.

“We expect the residents to be with us for a year to two years. It’s kind of a step-up, step-down program where when they come in, it’s typically an emergency situation for short-term placement that we hope will then turn into self-sufficiency. That is the ultimate goal.”

The residents will stay rent-free while they go through their transition.

“There’s just so many homeless (people) out there and many, many, many of them are veterans,” Charlotte Reeves, a member of the center’s board of directors, said of the project. “It just seems like the need is there and we had the property over in Vicksburg. We just started putting things together.”

Pickett said some veterans and the homeless are presently living on the property in four mobile homes built and delivered by Cappaert Homes of Vicksburg. He said Tuesday that four more mobile homes are scheduled to be delivered.

“What we do know from just being there and in operation is there is a never-ending need of folks who need affordable housing and will be able to stay rent-free until they get on their feet,” Pickett said. “We are providing services; we have veterans on the site and disabled people on site that we care for.”

The services provided by the center include counseling, food “and a stable housing situation.”

Pickett said the organization is in the process of getting certified by Mississippi Home Corporation, clearing the property and getting permits from the city of Vicksburg.

“We’re a work in progress; we’re not ready to roll it out yet, but we’re pretty darn close and we will announce our plans in the future,” he said. “We’ve been working on the project for two years. We’re very excited.”