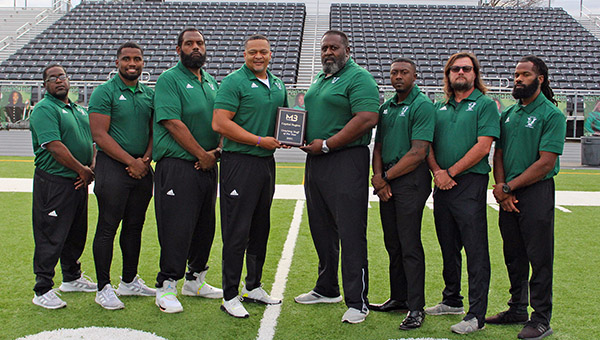 Vicksburg High’s football coaching staff earned a bit of recognition and respect for the job it did this season.

The Gators’ nine-person staff received the Capital Region Football Coaching Staff of the Year award on Monday.
The award is sponsored by M3 Sports, a sports training outfit based in Canton, and winners were selected from among the high school teams in the Jackson Metro area.

Vicksburg finished with a 7-5 record this season and reached the second round of the MHSAA Class 5A playoffs before losing to state power West Point.

The Gators hosted — and won — a playoff game for the first time since 2008, and had their first winning season since 2016. They won two games in 2020, McDaniel’s first season as head coach.

Along the way, Vicksburg put up some of its best offensive and defensive stats in years. The Gators averaged 293 rushing yards per game and had three backs with 800 yards or more. Otis James, who led the bunch with 1,041 yards and 11 touchdowns, was the Offensive MVP in MHSAA Region 2-5A.

On defense, Vicksburg put together a string of four consecutive shutouts. It was the school’s longest such streak since 1973.

Three players — linebacker Demarion Robinson, cornerback Jaleel Fleming and offensive lineman Jaquez Williams — were selected to the Mississippi Association of Coaches Class 5A All-State team. Those three, and 19 of their teammates, were on the All-Region 2-5A team.