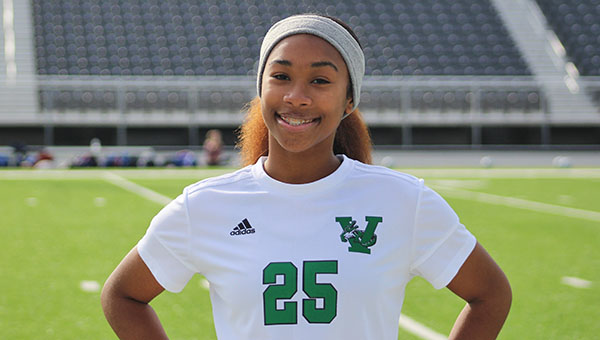 Vicksburg High soccer player Jamiyah Gaines scored the game-winning goal in an overtime shootout Friday to give the Missy Gators a win over Cleveland Central.

The Vicksburg Missy Gators capped a busy week — and the first half of their soccer season — with a game to remember.

The Missy Gators rallied after giving up a game-tying goal late in overtime and missing two of their first three penalty kicks in a shootout, to beat Cleveland Central 3-2 on Friday night.

Vicksburg (5-10-1, 2-1 MHSAA Region 3-5A) played its fourth game in as many days, and won three of them. This one was scoreless at halftime, then got a little wild after that.

In the shootout, Mullins scored on the Missy Gators’ first kick but her teammates missed the next two. Cleveland Central converted its first two kicks and only needed to make one more to clinch the victory, but it never got there.

Mullins, who was also playing keeper, made a save against Cleveland’s Aniya Mitchell and the Warriors’ next two shots were both off the mark. That opened the door for the Missy Gators to mount a comeback, which they did.

Alysha Murrell scored on the fourth of Vicksburg’s five kicks to tie the shootout at 2-2, and then Jamiyah Gaines scooted her PK just under the keeper’s arm to give the Missy Gators a 3-2 lead.

Cleveland keeper Ashton Orr took her team’s last penalty kick and pushed it wide left, giving Vicksburg the win and a leg up in the Region 3-5A race.