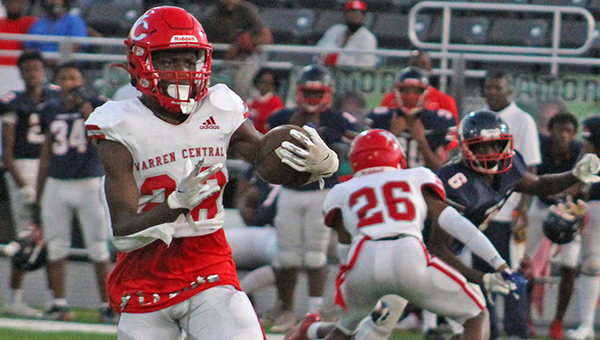 Another wave of postseason awards was showered upon Warren Central’s football team this week.

Eight of the team’s players were selected to the MHSAA All-Region 3-6A first team, and four more to the second team in voting by the league’s coaches.

The three offensive linemen, Thompson and Gilliam had previously been selected to the Mississippi Association of Coaches Class 6A All-State team. Bell and Miller were first-team All-State selections — Bell was picked for the second year in a row — and played in the Mississippi-Alabama All-Star Game last weekend.

Lee was a second-team All-State selection and will play in the Bernard Blackwell Mississippi All-Star Game Saturday in Gulfport.

Gilliam made eight field goals and was 29-of-33 on PAT attempts, had 24 touchbacks on kickoffs, and averaged 36.5 yards per punt.

Davenport led the Vikings in tackles, with 117, and Simon was second with 80. Mims had a team-high five interceptions, and also blocked six punts and field goals.

Hall led the Vikings with 40 receptions, and had 848 combined rushing and receiving yards to go along with six touchdowns. Lynch caught 39 passes for 572 yards and three TDs.