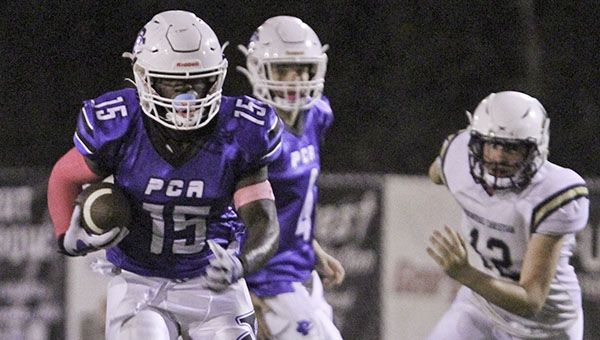 Porter's Chapel Academy running back Tyler Washington led Warren County in rushing this season and was one of a dozen players from the county to make either an MHSAA or MAIS All-State or All-Star team. (Paul Ingram/For The Vicksburg Post)

By almost every measure, the 2021 high school football season was a good one for Warren County’s teams.

There were a lot of “sinces” referenced this season, as Vicksburg and Porter’s Chapel Academy both accomplished things they hadn’t done in a long time. Warren Central was its usual steady self in reaching the second round of the MHSAA Class 6A playoffs, but had to shake off an early-season slump to get there.

The final act of the 2021 season is picking our annual All-County football team and it, too, is a good one. Twelve of the 30 players picked were either MHSAA or MAIS all-state selections, picked for one of the major statewide all-star games, or both. Most of the others made an all-region or all-district team.

With so much local talent and team success, it was easy to fill out the all-county roster — other than leaving off a couple of very worthy players — but much more difficult to pick the best of the best for our annual awards.

For the Coach of the Year award, Warren Central’s Josh Morgan, Vicksburg’s Todd McDaniel and Porter’s Chapel’s Blake Purvis were all deserving candidates.

McDaniel and Purvis turned struggling programs into playoff teams, while Morgan and his staff pulled the Vikings off the deck after they started 0-3 in region play.

Among the Defensive Player of the Year candidates, Vicksburg defensive back Jaleel Fleming led Mississippi in interceptions. His teammate Demarion Robinson and Warren Central’s Floyd Davenport, both linebackers, each had nearly 120 tackles and a number of tackles for loss for defenses that posted several shutouts.

Offensively, senior running backs Tyler Washington and T.J. Thompson of Porter’s Chapel Academy and Warren Central, respectively, often carried the ball and their teams on their backs. Both had more than 1,000 rushing yards and a double-digit touchdown total.

St. Aloysius’ Padre Gray also had an outstanding season, as did any one of several Vicksburg backs. Otis James had more than 1,000 yards and was the Region 2-5A Offensive MVP. Two of his teammates had more than 800 rushing yards. Between Warren Central and Vicksburg, four offensive linemen made the Mississippi Association of Coaches’ All-State team.

To quote the “Highlander” movie series, however, there can be only one. Part of my job is to split hairs and make the tough call on who did a slightly better version of the same great job, even when all of the candidates have a strong case.

So, without further ado, congratulations to our 2021 award winners Demarion Robinson, Tyler Washington and Josh Morgan.

Washington had a season that put him in the record books for PCA and Warren County. Robinson not only made tons of plays, he was a leader on one of the state’s best defenses. Morgan and his staff made the hard decisions and midseason adjustments that turned a potentially disastrous season into one to remember. All three prevailed over stiff competition not just on the local level, but the state level as well.

Congratulations to all of them, and to all of our all-county selections. They will be honored in our pages this week. Morgan will be featured in Wednesday’s edition, the All-County defense on Thursday, and the All-County offense on Friday.

Look for it, and give a hearty round of applause to all of those who made it. This season, they truly earned it.