Nailor sworn in as City of Vicksburg attorney, Allen as assistant city attorney 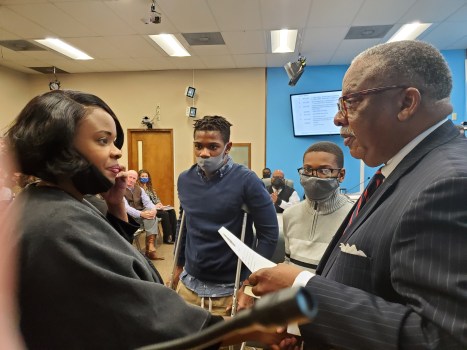 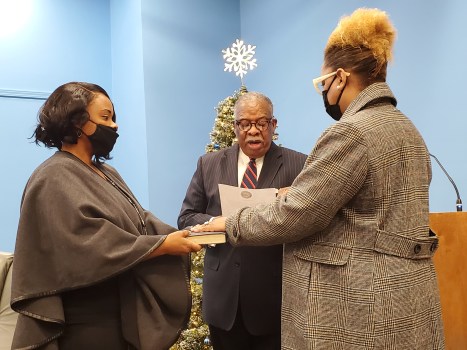 Mayor George Flaggs Jr. swore Nailor in during a brief ceremony at Monday’s meeting of the Board of Mayor and Aldermen. Her sons, Cameron and Brandon, accompanied her. The city’s new assistant city attorney, Monica Allen, was also sworn in.

A native of Vicksburg and a graduate of Alcorn State University and the University of Mississippi Law School, Nailor has served on the CAP Center Board of Directors and as a lawyer guardian ad litem in the Warren County Youth Court. In 2017, she served as the bond attorney for the city’s bond issue for Sports Force Parks on the Mississippi.

She was in private practice when she was appointed assistant city attorney in March and also served as city prosecutor.

Nailor said she has worked with Thomas on some of the city contracts and projects as assistant city attorney, “so I had an opportunity, just working under her for these past two years to get an idea of what needs to be done and what our obligations are.”

Besides serving as the bond attorney for the Sports Park complex, Nailor also served as assistant city prosecutor.

She said the experience helped influence her decision to take the appointment when former assistant city attorney Walterine Langford stepped down.

“I gladly jumped to come work for the city,” Nailor said.

As assistant city attorney, Allen will work with Nailor on city contracts and projects and also serve as city prosecutor.

She is a graduate of Tougaloo College in Jackson and Loyola University Law School in New Orleans, La. She has served as city attorney for Jackson and Canton and has a master’s of public administration from Belhaven College.

Allen said Flaggs and Nailor both talked to her about working for the city.

“I love municipal law; I’ve been practicing it for about 15 years,” she said. “I have a great relationship with both of them and I decided this would be a great fit.”

The two attorneys will hit the ground running.

“Right now we are in the process of streamlining; the city has a lot of projects that we are reviewing the contracts for,” Nailor said. “We are also in the middle of reviewing ordinances because we are going to be amending and changing some of the ordinances.

“We have a great undertaking, but we’re ready and prepared to start this new task.”