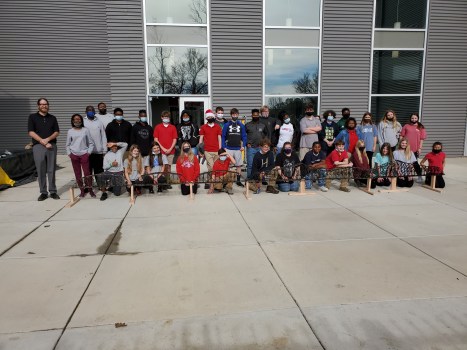 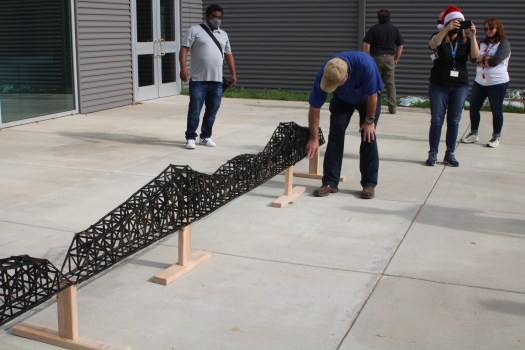 This scale model of the Old Highway 80 Bridge was deemed to be in good condition by Bridge Superintendent Herman Smith, who stopped by the Academy of Innovation last week for an inspection. (Photo by John Surratt | The Vicksburg Post)

The eighth-grade science, technology, engineering and math class at the Vicksburg Warren School District’s Academy of Innovation modelers recently built a scale model of the Old Highway 80 Bridge out of Popsicle sticks.

“We were talking about the bridge and decided to take on the task,” he said.

The students used a scale where 1 inch equaled 10 feet. They used jigs to develop each panel of the bridge and spreadsheets to determine the length of the span.

“We each spent about five hours a day on it,” Ross said. “The bridge is a truss and cantilever bridge with a beam structure. It’s not a curved bridge, but the pieces fit at a specific angle to mimic a curved bridge.

“The student leadership completed the bridge; I provided the tools, the extra confidence and the positive support.”

The class assembled the bridge in an open area at the school and got it ready for inspection by Smith, who walked alongside the structure.

“It looks pretty good,” he said.